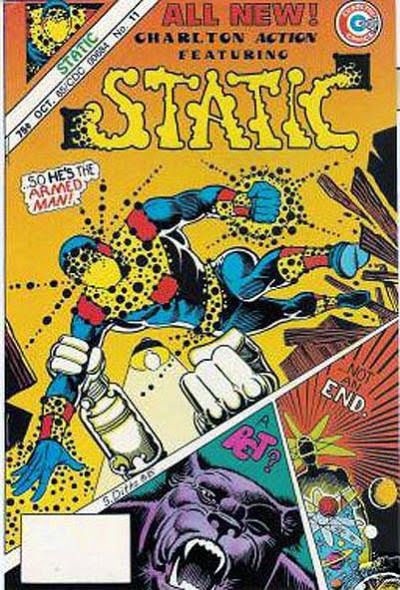 Like many long time comic fans, I fell in love with the medium at a young age. I learned to read from comics. Comics have been a lifetime passion of mine. One of the artists responsible for this passion was one of Charlton's (and indeed the entire industry's) shining stars, the legendary Steve Ditko.

I first discovered Ditko's work in reprints: The Origins of Marvel Comics collection, as well as Marvel Tales, which reprinted Ditko's Spider-Man run from the beginning. Even at a young age, Ditko's work spoke to me more than most of the current books being published.

Then one day, while pouring through the spinner rack at the local K&B drugstore, I came across something that I thought was called Static, but on closer inspection, it was Charlton Action Featuring Static! What was this?

I flipped through the comic, instantly recognizing that oh so familiar art style. New Ditko! My ten year old mind boggled! I had to have it! Thus, this became my first Charlton.

I had seen some Charltons before. Some of the funny animal and war reprint books that were then on the stands. Strange books, these Charltons, with their old fashioned but cool artwork and their cheap paper. The company was in their last gasp, not that my ten year old self knew anything about that at the time.

But this was Ditko! All Ditko! 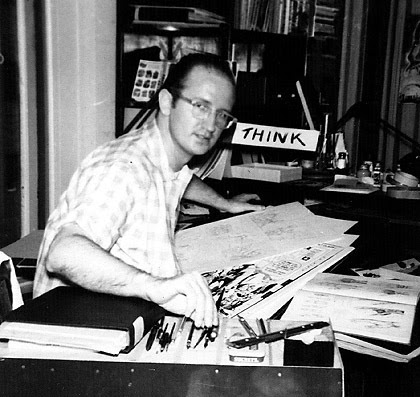 In classic comic hero fashion, Stac Rae undergoes a scientific experiment which allows him to manipulate the electrical energy of the space environment suit that he and his friend, Dr. Serch, have been working on.

Stac and Co. are soon drawn into a murder scene as Dr. Serch's colleagues are being killed off by "The Armed Man." I really liked the AM design, a classic Ditko motif that would have been at home in Spider-Man, Blue Beetle, or a number of other Ditko strips. (In fact, thinking about it, it's pretty similar to Iron Arms from Captain Atom. Hmm...!)

The second tale, Pet Monster, seems a pretty standard take on the "Creature on the loose" genre, until the last page. The half splash reveal seemed grotesque to me back then, although it's truly tame by modern standards (and those of the time, most likely).

But it's the third story which is my favorite of this trio. “The Beginning” relates the tale of Captain Brak, a space cop who becomes merged with a living universe (eat your heart out, Grant Morrison!) to become a hero. This is a story in the mold of Ditko's own Shade and the Levitz/Ditko Starman and I wish there were more of it. It remains to this day one of my favorite Ditko stories. Pure imagination unleashed! * 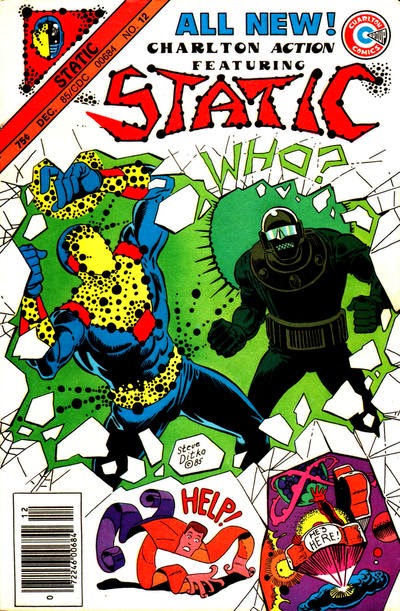 Along the bottom of the first few pages of “The Beginning” are examples of other concepts Ditko was working on. I eagerly scanned across all these "new" characters wondering at the story and names behind each of them. Some of them I've learned about: Mr. A, Killjoy, Missing Man. Most remain a mystery to me. Mysteries I hope to solve one day.

I long ago lost my original copy of CA #11, but thanks to my friend, Steven Butler, and the good people at www.mycomicshop.com I have replaced it and picked up many other great Charltons. 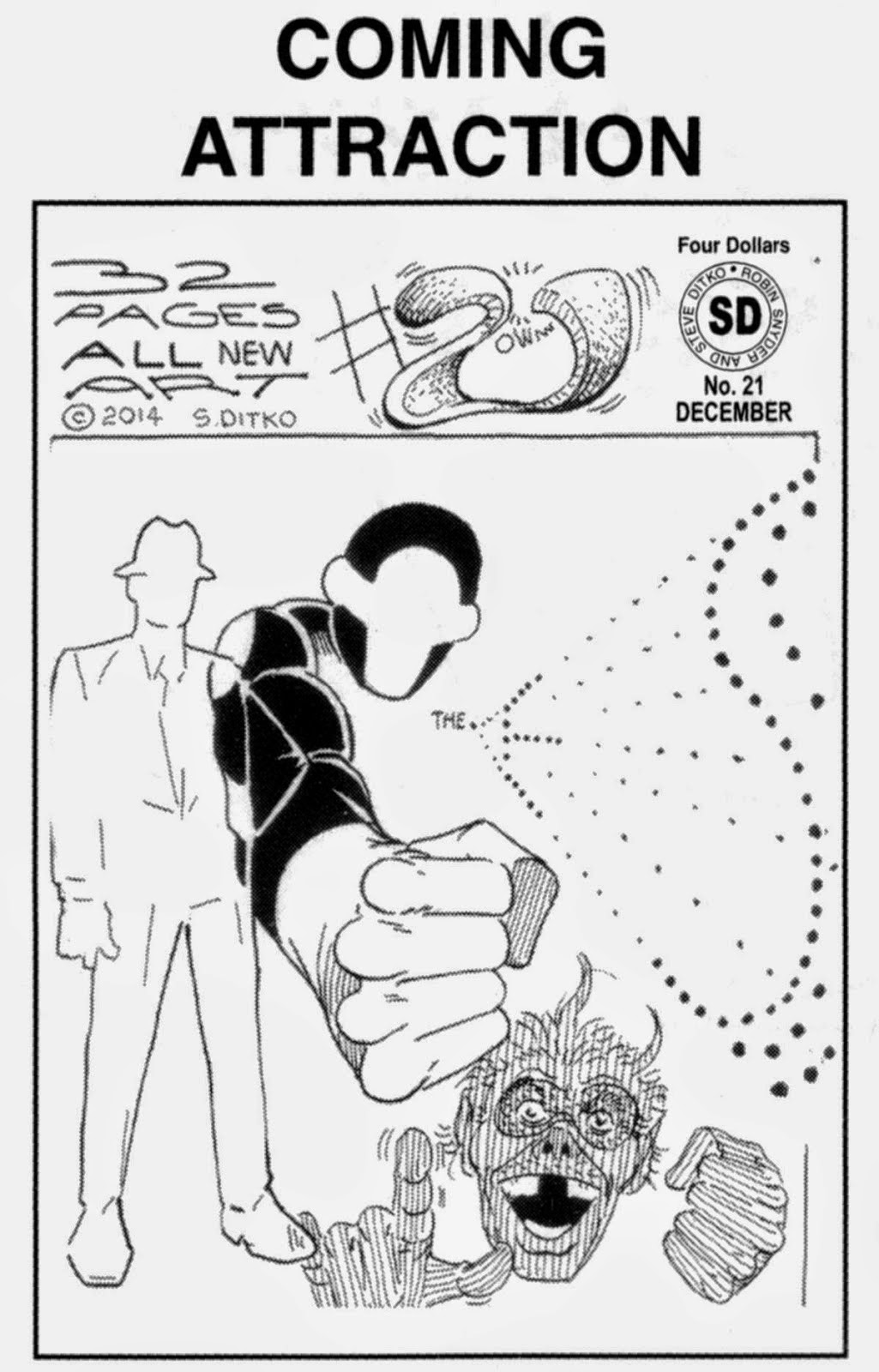 Not too long ago, I received 2oww1! and severalother Snyder-Ditko comics. New Ditko! My on-the-verge-of-turning-forty-years-old mind boggles...

Oh, and then I discovered Dr. Graves. But that's a story for another time.
© Von Grimm

* Ditko’s Static was retitled, recolored, relettered and slightly rewritten from its original 1983 debut in Eclipse Monthly, from which Ditko pulled the serial following editorial disagreements.
Posted by Paul Kupperberg at 9:03 AM 1 comment:

Writer In Progress 5: Tales of the Red Pen 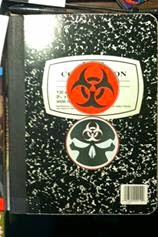 And thus we arrive at the last, and what has become my favorite, part of my personal writing process–the Re-Write.  Or, as I call it:

When I began this series in November, I opened with a great quote from Kurt Vonnegut about the two kinds of writers: “Swoopers” and “Bashers”...

This seems to be an appropriate place to begin discussing the re-write process. I’m a “Swooper,” even when writing the script, based on a carefully planned outline and detailed story. Sitting at the computer with my notebook (see above) in front of me, the script just sort of pours out. I know it’s a first draft, so any inconsistencies and mediocrities will be ironed out with the Red Pen Edit.

Once the draft is done and I break the ramblings into pages, I print the whole thing out. Some pages will be fully realized script, and those I will look over for grammatical and formatting mistakes, ways to improve dialogue, and to ensure that the scene accomplishes what it is intended to do in the best and most efficient way possible. 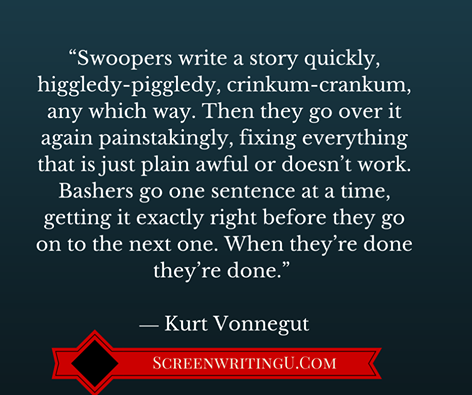 Then there are the pages that only include some vague panel descriptions or a snippet of “cool” dialogue. Those get almost totally rewritten, or, in some most cases, written for the first time, with the aforementioned red pen. I like the tactile experience of using a pen, and it gets me into a different mind space than the one I’m in while typing.

And red brings back all sorts of wonderful memories of High School English papers!

Once the Red Pen Edit is complete, I give it a day to percolate a little bit, then read through my notes and scribbling, making sure everything makes some sort of sense. Then it’s back to the computer to type everything out, another form or a re-write as panel descriptions and dialogue can often change and be enhanced at this stage as well.

Once it’s all said and done, or written and done, the script will have gone through five stages:

1. Story – A brainstorm of all the ideas you want to include in the comic book, realized in some sort of narrative framework

2. Structure – Taking that story and working it into The Three Act Structure and The Hero’s Journey

3. Break-Down – Taking your structured story and molding it into the format of a comic book, paying close attention to page turns and reveals, as well as giving your artistic collaborator room to create

4. Script – Where you turn pictures in your head into words on a page, which will then turn into pictures in an artist’s head and then assemble themselves on a different page

5. Re-Write – Throwing away about 80% of what you just did and making it better!

Now you’re ready to submit your masterpiece to the good people at Charlton Neo!

Further Reading (or, Books That Make Me Seem Kinda’ Smart)

Words for Pictures: The Art and Business of Writing Comics and Graphic Novels by Brian Michael Bendis 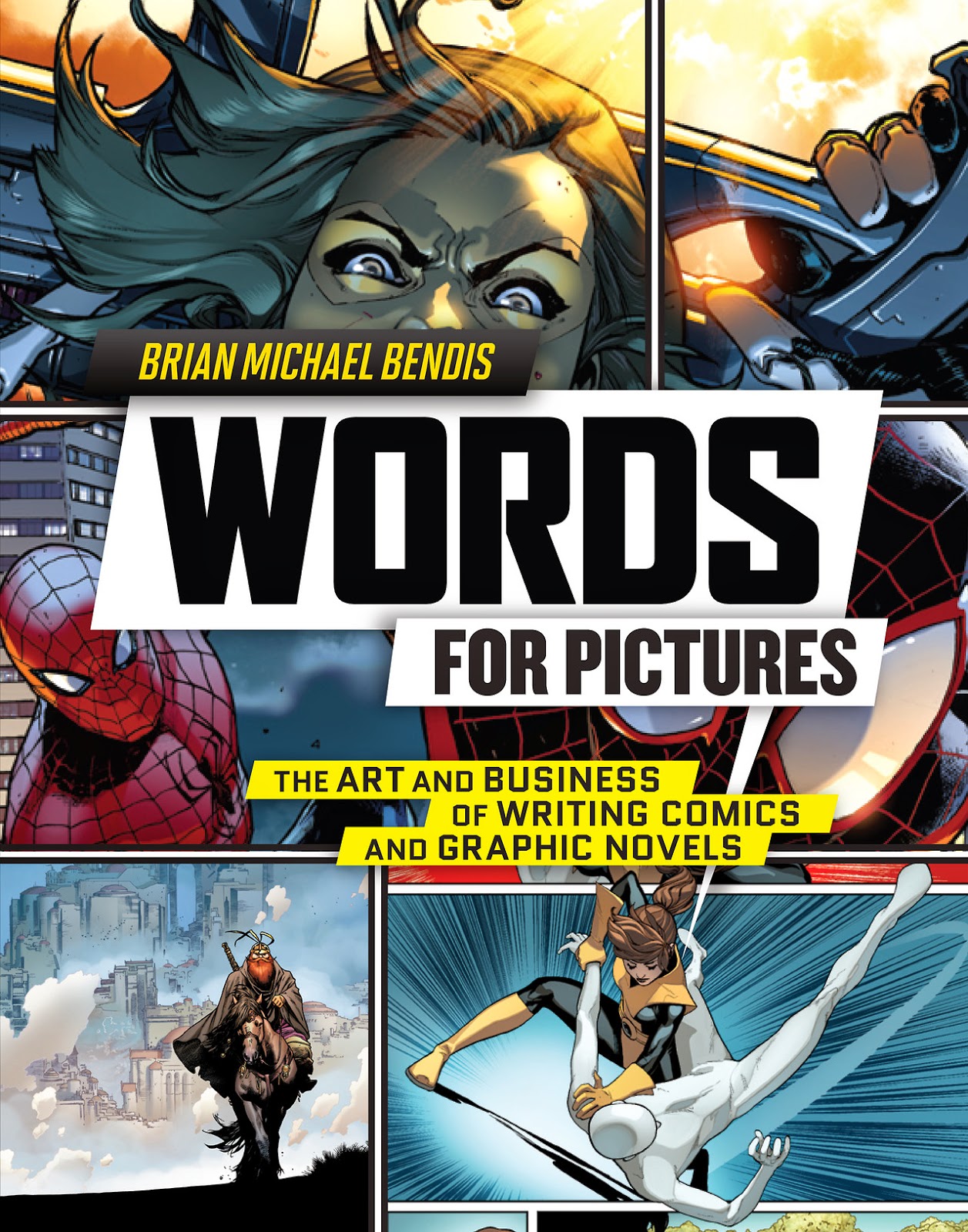 Posted by Paul Kupperberg at 5:54 AM No comments: 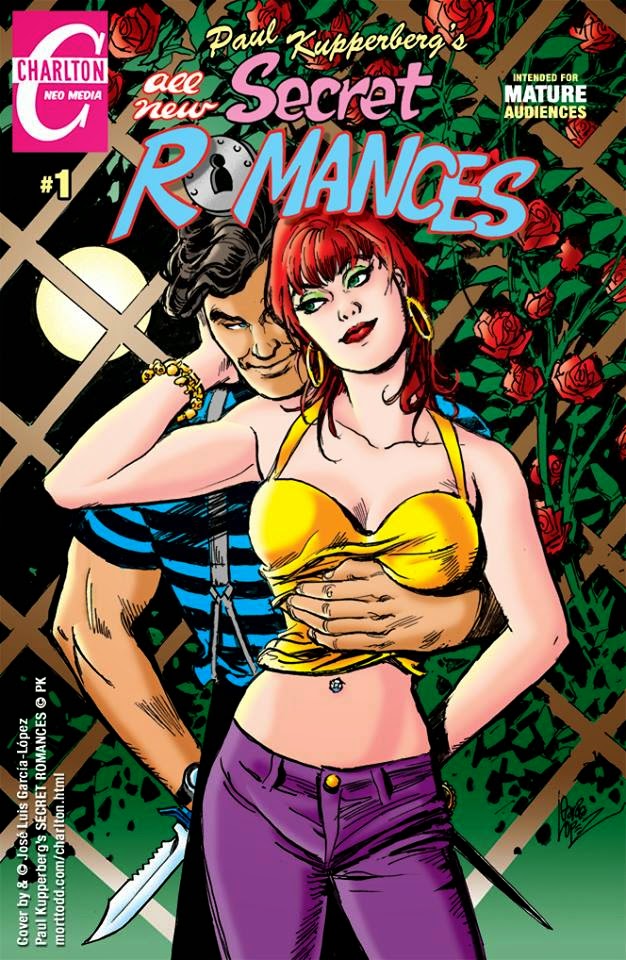 There’s nothing quite like the moment when contributors copies of the hot off the press newest project you’ve worked on arrive at your door. The box or package is opened and out spill copies of the work, all brand new and shiny. Often, this is the first time I’ve seen the finished story or book. Just the other day, the surprise in the package were copies of Archie Loves Betty and Veronica Mad Libs, a project I wrote over a year ago. And just as good as finally getting to see the finished piece was the fact that the book carries my byline. Mad Libs do not, as a rule, run writer’s credit. Instead, the cover and title page usually just read “Concept created by Roger Price & Leonard Stern,” but at the insistence of the licensor, my pals and gals at Archie Comics, I was given the rare Mad Libs title page byline.

Not that my name hasn’t been on enough publications that one more or less was going to make a difference. It’s appeared in plenty of credit boxes, book and comic book covers, tables of content, title pages, and in footnotes and endnotes of comics history and reference books.

Anyway, a couple of days after the arrival of the Mad Libs, Mort Todd sent me a PDF of the first issue of an upcoming Neo title for proofreading that elevated my name to a place it had never been. That I never expected it to wind up. Not just above the title...but actually a part of the title. As in Paul Kupperberg’s Secret Romances. Like “Alfred Hitchcock Presents” or “Stan Lee Presents”...only, you know, not.

While it’s definitely a massage to the ego having your name in the title, it’s also a little embarrassing. And, in the case of Paul Kupperberg’s Secret Romances, not my idea. My working title for the project had been Postmodern Love Stories, which was how I pitched it--beginning in 2011, pre-Charlton Neo--to whatever comic book publishers I could reach out to. Those that bothered to respond praised the material but passed on the book because, as they all said, “romance comics don’t sell.” Of course they don’t; you can’t sell what isn’t being published.

But logic being what it is to those who have already made up their minds, Postmodern Love Stories made the rounds, after which it kind of just lay there, not forgotten but going nowhere. Until mid-2014, when it suddenly became apparent to me that I finally had access to an editor who might be open to my proposal: me!

Well, Charlton Neo, to be exact. I pitched Postmodern Love, Neo said yes, and my orphaned project finally had a home. The ideal home. The original Charlton Comics had been a prolific publisher of romance titles and, like the other genres that modern mainstream comics has seen fit to ignore in favor of all-superheroes, all the time, Charlton Neo believes in comics without capes to add flavor to the otherwise homogenous stew of bulging biceps and colorful costumes.

It was Mort’s idea that we change the title to connect the comic to its Classic Charlton roots. I ran the list of Charlton romance titles and Secret Romance seemed to be the best fit. Mort also thought it would be a good idea to add my name to the title, purely, as I recall, as a marketing move. We were having these discussions mid-year, during the height of the media attention I was receiving for having written “The Death of Archie,” so exploiting my name seemed to make sense at the time, I suppose. Whatever...it got me a comic book with my name in the title.

And, no, the title doesn’t mean that these are tales of my own romances, secret or otherwise (well, with the exception of an incident that ended up being used as a springboard for one of the stories), just good old fashioned love stories with a nod towards 21st century realities. And snark. A lot of snark. I mean, have you met me?!

It’s not out of line, nor without some poetic symmetry, to say that getting Secret Romances to publication has been a labor of love, and wouldn’t have been possible without the aid and abetment of a whole lot of talented and generous people, beginning with artists Pat and Tim Kennedy, who penciled three stories for the proposal, and scrivener  extraordinaire Jack Morelli who lettered two of the above. But I’ll go into more depth on the ladies and gentlemen who brought my scripts to reality in the next go-round on this here blog.