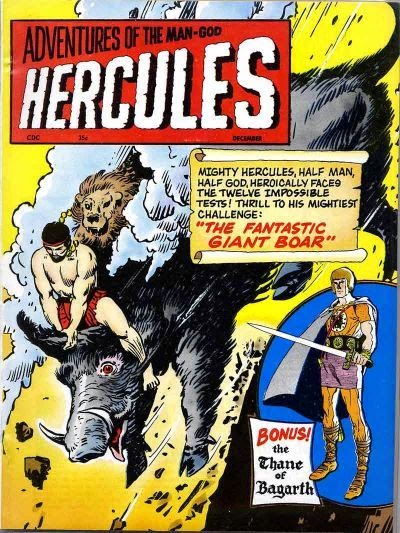 And while those two comics shared a number, cover date, and one story, there was something about that B&W magazine that grabbed hold of me and made me read and reread it until, in all likelihood, it fell apart. I still have a vivid memory of laying on the floor in front of the TV set in my grandmother’s apartment on Brooklyn’s Avenue B and East 92nd Street, my face buried in that comic, absorbing the “adventures of the man-god Hercules” by Joe Gill and Sam Glanzman and the back-up tales of Thane of Bagarth by Steve Skeates and Jim Aparo. Very few comics are so indelibly imprinted on my brain that I can summon up the time and the place when I first read them--off the top of my head I can think of The Flash Annual #1 (1963), Detective Comics #324 (February 1964), the first Secret Origins 80-Page Giant (Summer 1961), and The Amazing Spider-Man #38 (July 1966)--but this one is still stuck there, 46 years later.

What was it about this comic that attracted me to it? I can’t tell you for sure, but I remember being enthralled by the black and white art of Sam Glanzman on the pair of Hercules tales (“The Fantastic Giant Boar” and “The Origin of the Man-God”), both enhanced by gray tone shading to compensate for the magazine’s lack of color. I also adored the heroic fantasy of Skeates and Aparo’s Thane (the three parts reprinted from Hercules #1-3 likewise shaded), and just found the entire package irresistible. On top of it all, the “Giant Boar” story had been expanded from its original 12-pages to 20-pages by taking panels and blowing them up to half-page, full-page, and even double-page size! 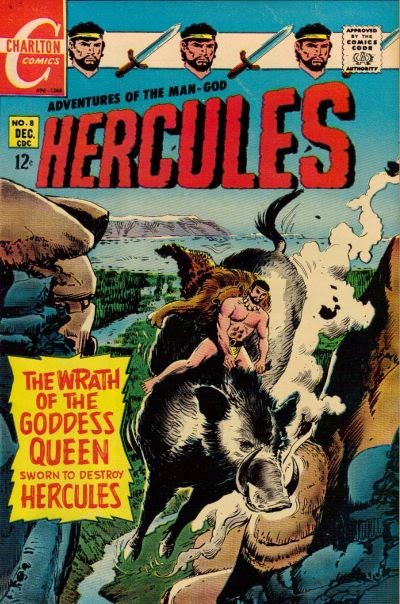 But typical of Charlton’s cheap approach to production, they didn’t bother resizing word balloons and captions in these blown-up panels, so the reader would turn the page to find a giant image accompanied by giant text, even though one can still clearly discern the paste-up lines where the photostated balloons had been dropped in. How hard would it have been to reduce the pasted in balloons and captions to match the size of the rest of the lettering (all hand done and not the product of A. Machine)? Not very...except that would have required a production artist to go in and extend the artwork to compensate for the reduction, staff time that no one there thought it worth expending.

It was cheesy, yes, but it was Charlton cheesy and that made it magnificent! 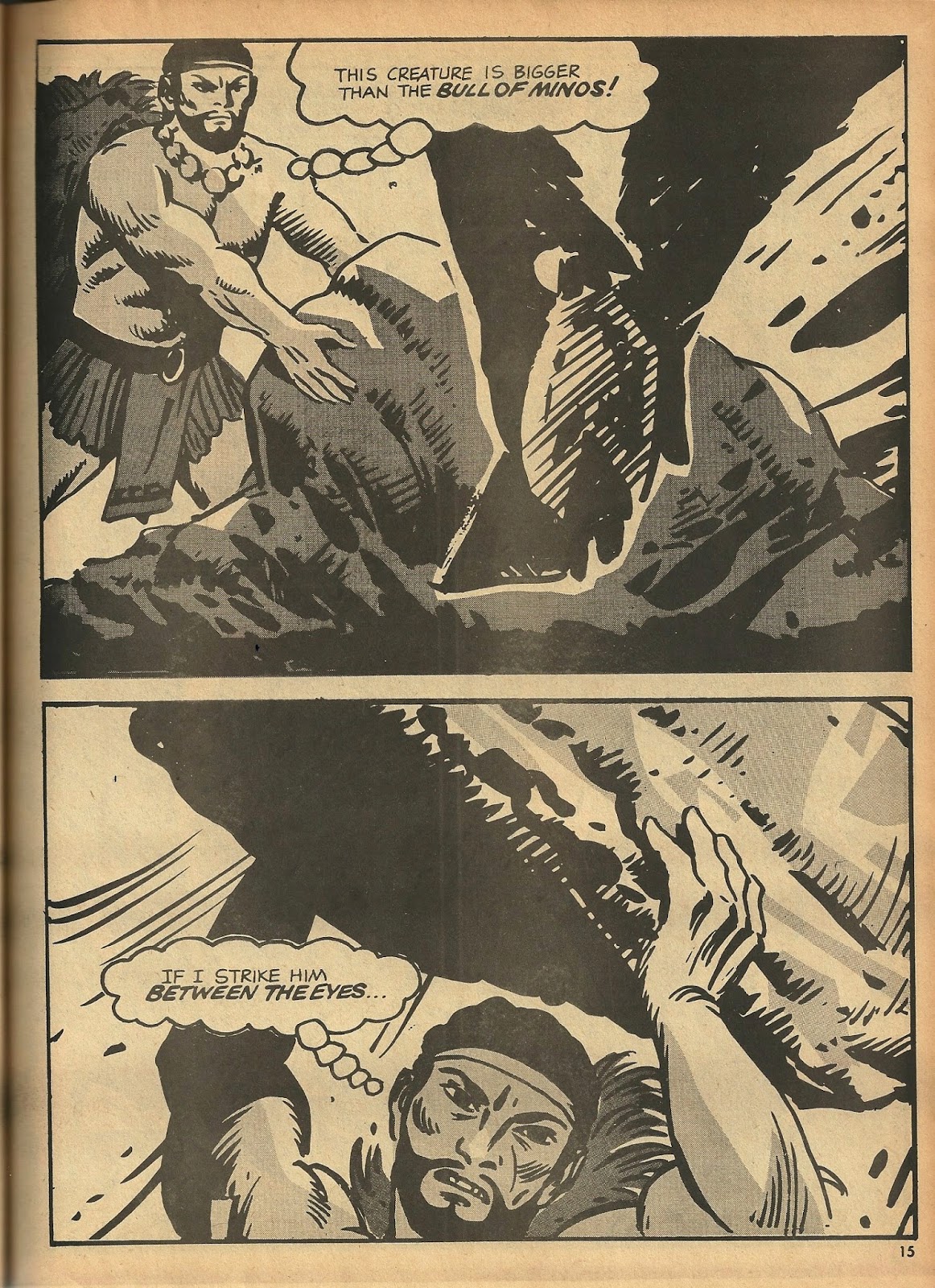 What made the dauntless dabblers from Derby decide to publish two versions of Hercules #8 at the same time, making use of the same lead story? I can only guess that it was an experimental move made in response to The Spectacular Spider-Man Magazine #1, published just a few months earlier (July 1968) by Marvel Comics. The House of Ideas, of course, made use of original material for its initial foray into B&W magazines (itself a stab at competing with Jim Warren’s Creepy and Eerie magazines), but Charlton never spent a cent that it didn’t have to spend.

Whatever the reason for it, Hercules Magazine #8 was the one and only of its kind from Charlton at that time. Marvel must have also discovered that mainstream superhero comics did not sell well to the higher end magazine buyers; The Spectacular Spider-Man Magazine lasted only one more issue and they wouldn’t return to the black and white magazine format until 1971’s Savage Tales. Charlton stayed away even longer, making use of it for licensed titles such as Space: 1999 and Emergency in 1975. 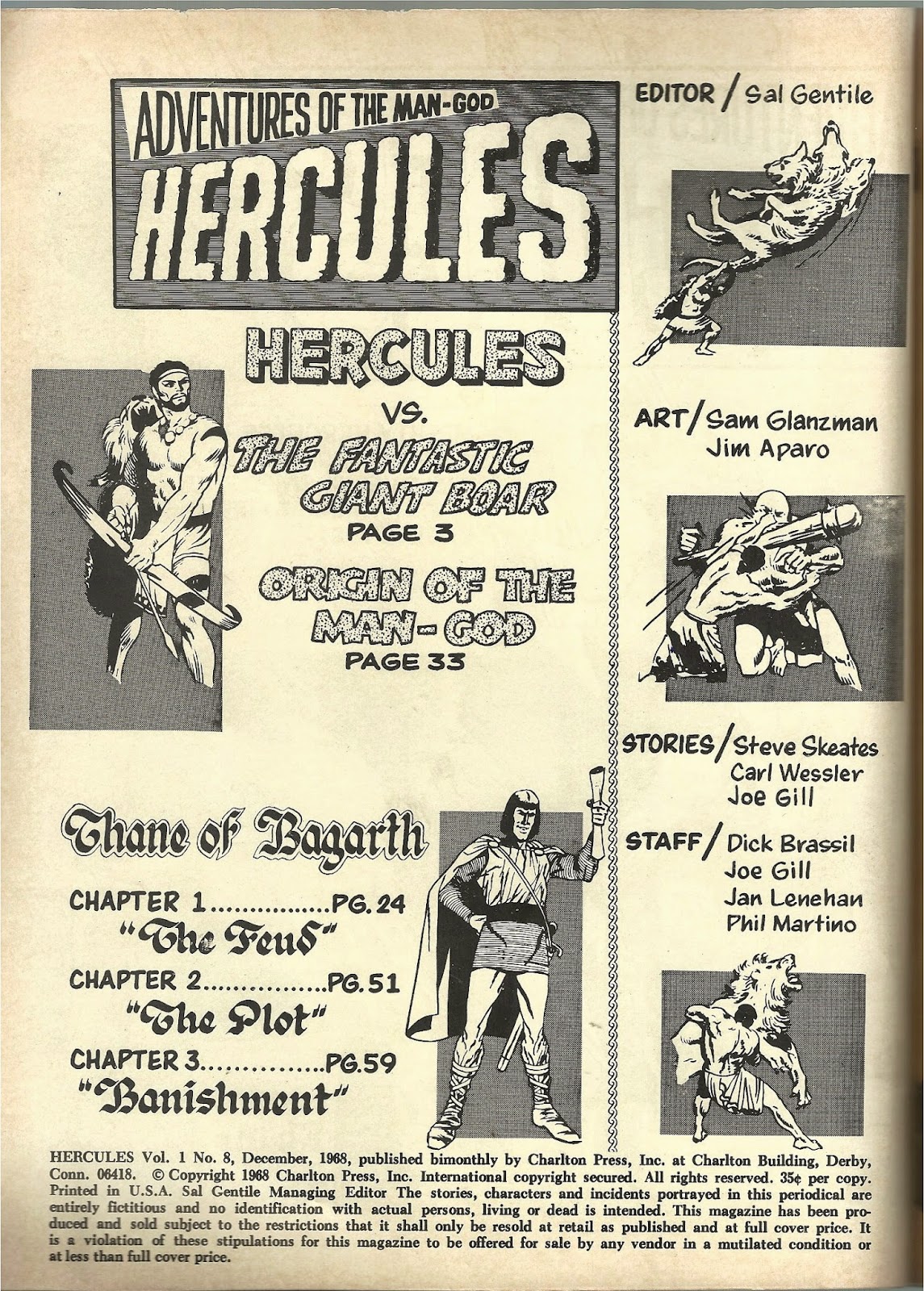 But that single issue of Hercules remains one of my most memorable comics from the 1960s, the era in which I came of age as a comic book reader. As usual, the little company that could came through.
© Paul Kupperberg
Posted by Paul Kupperberg at 4:21 AM