This all started while I was working on a new drawing featuring the character Liberty Belle. As most Charlton fans know, Liberty Belle made her first appearance in the back pages of E-Man (#5 to be exact) in her one-and-only appearance (so far) by writer Joe Gill and artist Steve Ditko. As I was working on the piece, it got me to thinking about all of the characters that appeared in the pages of E-Man, which led me to thinking about a “dream” project that I think most Charlton fans would’ve loved to see back in the day: an E-Man annual that would feature all of the characters who had appeared in the book. 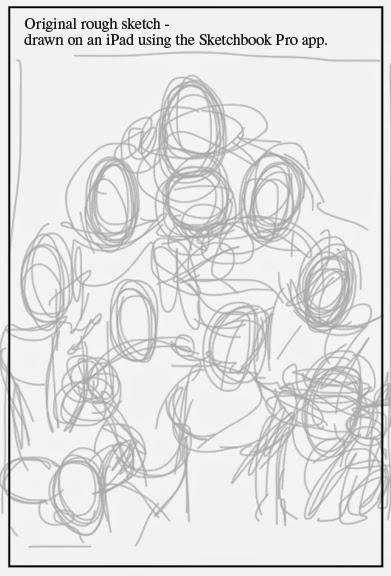 Before I get too far ahead though, I have to admit, I was sort of a latecomer to Charlton Comics when I was a kid. My brother wasn’t and I distinctly remember him getting copies of Charlton’s Hee-Haw comic, the Partridge Family book, the Bugaloos comic, and George Wildman’s incredible work on Charlton’s run on Popeye. I, of course, was looking over those books and in particular loved Wildman’s Popeye (even eventually teaching myself to draw Popeye by copying Wildman’s work), but still I always hesitated buying anything from them for a couple of reasons; 1) I was pretty much concentrating on DC and Marvel comics, and 2) my Dad put a limit on how many comics I could buy in a week: two. 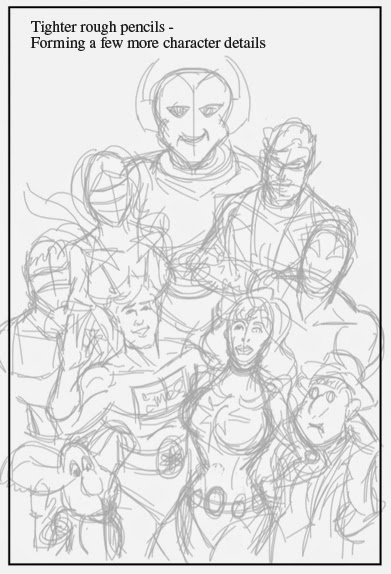 One week though, I was in the grocery store where I regularly bought my comics, and there wasn’t really anything that was particularly appealing to me from the Big Two and I saw a couple of these E-Man comics from Charlton (#6 and #9). I flipped through the books and though the art was a little more cartoony than what I was used to, I thought “What the heck…” and picked them up.

Well, I absolutely loved them!  E-Man and his girlfriend Nova Kane were really cool and friendly characters and the stories by writer Nicola Cuti were just a lot of fun. I really started to love Joe Staton’s artwork the more I kept looking at it and I was just absolutely enchanted. On top of all of that, both issues featured back-up stories with this odd robot cab driver called Rog-2000, written by the aforementioned Mr. Cuti and drawn by another artist I had never heard of, John Byrne. Again, I was just enchanted as could be. 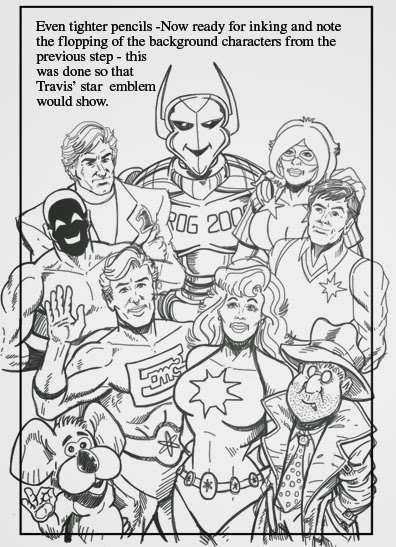 Now, I was always drawing when I was a kid and I started off by copying pictures out of comics in pencil on some really cheap paper that my Dad used to bring me. By the time I’d picked up these copies of E-Man, I started to use a black Flair pen to ink my drawings and I was going further and coloring them with colored pencils. I started to create my own comics and one of the very first things I ever did was a little 9-page E-Man story with E-Man (flying solo) in a rematch with the Brain/Genius villain (sorry, the character’s name escapes me) from E-Man #9. I was in the habit of starting a comics story and never really finishing it, but this one was different. I was just excited drawing this thing and I went on and actually completed it (and I wish like crazy that I still had it; I’d certainly show it if I did). 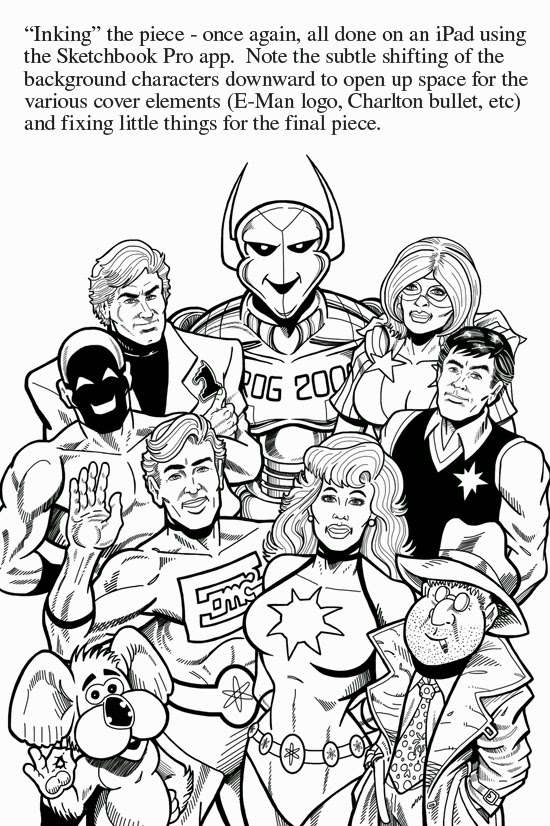 Eventually, I managed to find more issues of E-Man over time, though some of them still escaped me. I didn’t discover the back-ups featuring The Knight, Travis, and Liberty Belle until just a few years ago, thanks to the Diversions of the Groovy Kind blog. I look back now at that time in Charlton and comics history and there really wasn’t anything like E-Man out there from anyone. Oh sure, you certainly had super-hero comics, but nothing like the tongue-in-cheek adventures of E-Man and Nova, and yet those stories also contained some great thrilling parts and some real poignant moments. The back-up stories were always trying something new and you think of the range of stories--the gritty adventure of super-agent Link Chain, The Knight, the light fantasy of the time-traveler Travis, broad super-heroics with the star-spangled Liberty Belle, the even broader adventures of Steve Ditko’s silent crime fighter Killjoy, and the wacky situations faced by Rog-2000 faced...this was fun stuff! 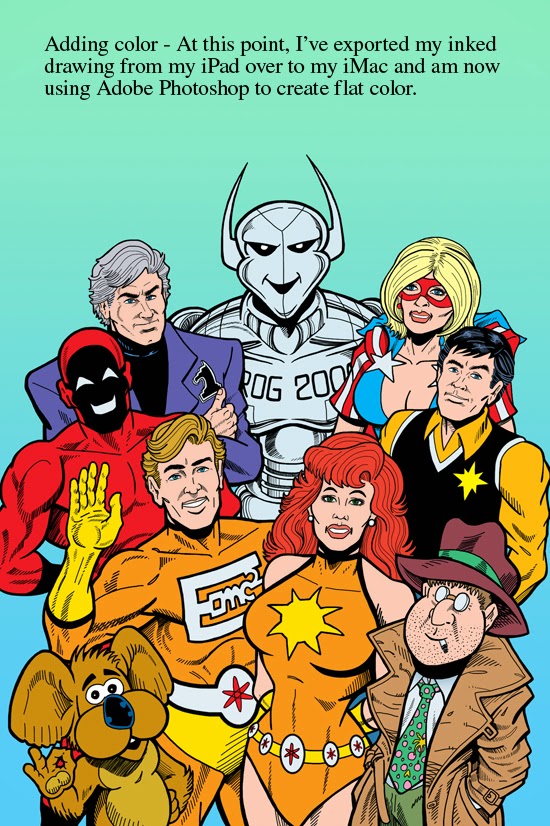 As I’ve gotten older, I find more inspiration from that original run of E-Man. There was a real go-for-broke attitude with that title and while it might seem quaint in comparison to the world-shattering, constantly character re-defining moments that we see in comics today, I don’t think that’s a bad thing at all. In fact, I think it’s just the thing we need a little more in our comics today. 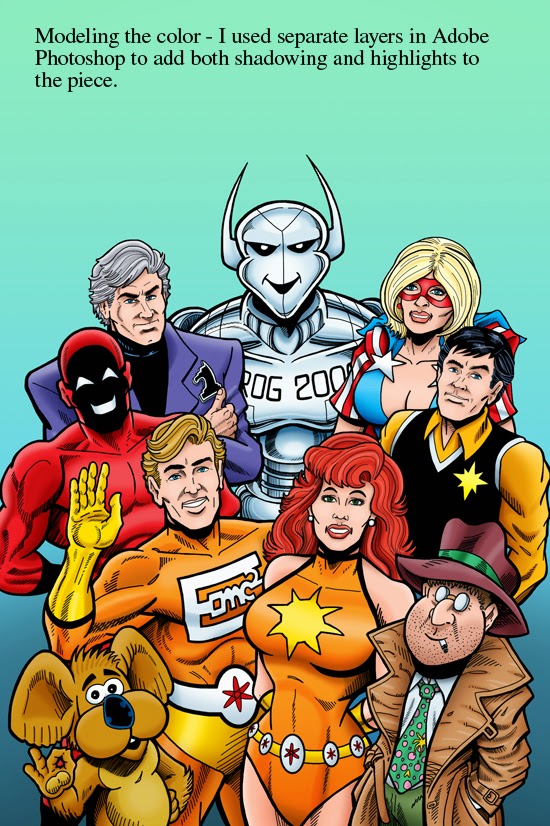 Consider this a huge salute to Joe Staton, Nicola Cuti, John Byrne, Steve Ditko, Joe Gill, Tom Sutton, and Wayne Howard for the terrific work they provided on that original run. This inspired me at the age of 13 and it’s still inspiring me today at the age of 52...and I’d bet that I’m not the only one. 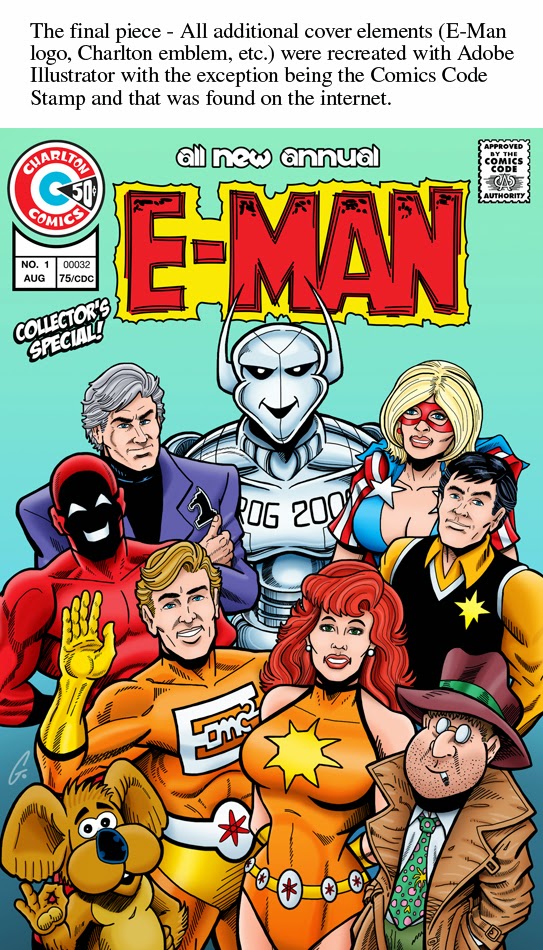 © Darren Goodhart
Posted by Paul Kupperberg at 5:05 AM