Roger McKenzie: The Devil He Knows 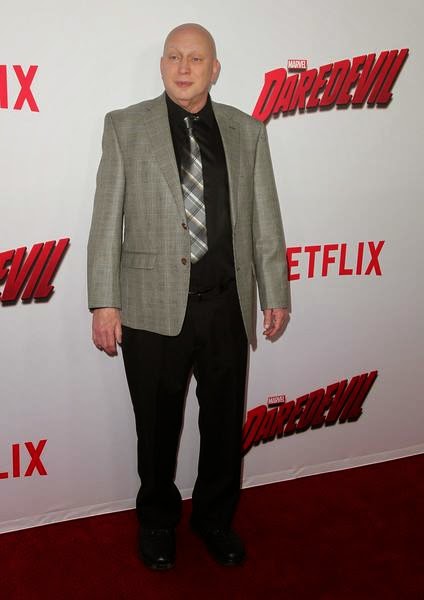 The big event for comic book fans this weekend is the premiere of Netflix’s Daredevil. The Man Without Fear, whose show is the first step towards The Defenders mini-series on Netflix, has had a number of talented writers and artists weaving his tales for over fifty years now. A few of them gathered recently in Hollywood to celebrate the premiere of the series, including our very own Roger McKenzie. Between his writing for comics and hobnobbing with the Hollywood Elite, Roger sat down for a quick interview to discuss his take on Daredevil and also give us the inside scoop on his upcoming projects for Charlton Neo Comics.

Dan Johnson: First off, congratulations on getting the invite to the Hollywood premiere for Daredevil. What did you think when you got that invitation?

Roger McKenzie: “Who? Me?” David Bogart, Senior Vice President of Operations & Procurement, Publishing, Marvel Entertainment, LLC called me a week or so before the premiere with a most kind invite! So he really got the ball rolling. So he’s to blame. I’d be planning to watch Daredevil here at home, never imagining I’d be seeing him on the Big Screen in Hollywood! 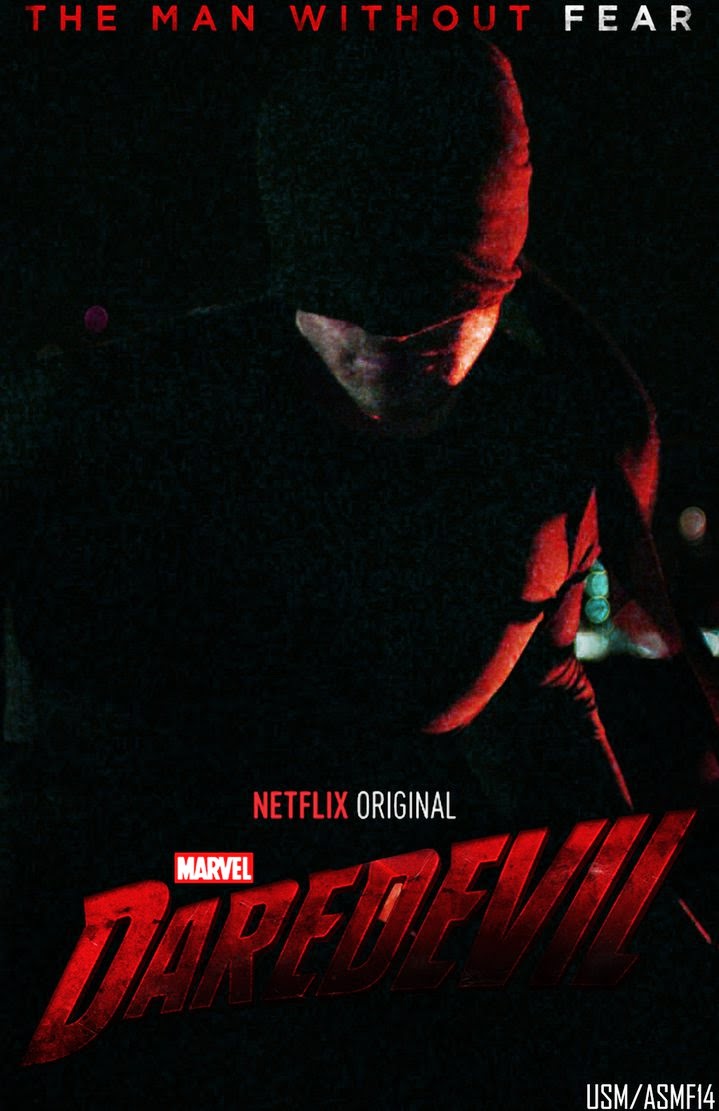 Johnson: You mentioned your wife, Tami, couldn’t attend the event, so you went with Charlton Neo Publisher Mort Todd. From there you arranged a meeting of the West Coast Charlton Neo Crew. Who all did you see while in California?

McKenzie: Mort and I had a great dinner with Arrowhead and ACP Publisher, William Mull (who graciously picked me and Mort up from LAX!). There was also my longtime friend, Kevin VanHook and man-about-town Daerick Gross, Sr., the amazing artist on our brand new Knightingales comic!

Johnson: Excellent! I want to ask you about Knightingales later. First, tell us about the trip to Hollywood and premiere. They gave you the full red carpet treatment, right?

McKenzie: The trip was fine and fortunately I DIDN’T trip as I shambled my way along the red carpet looking for spare change… 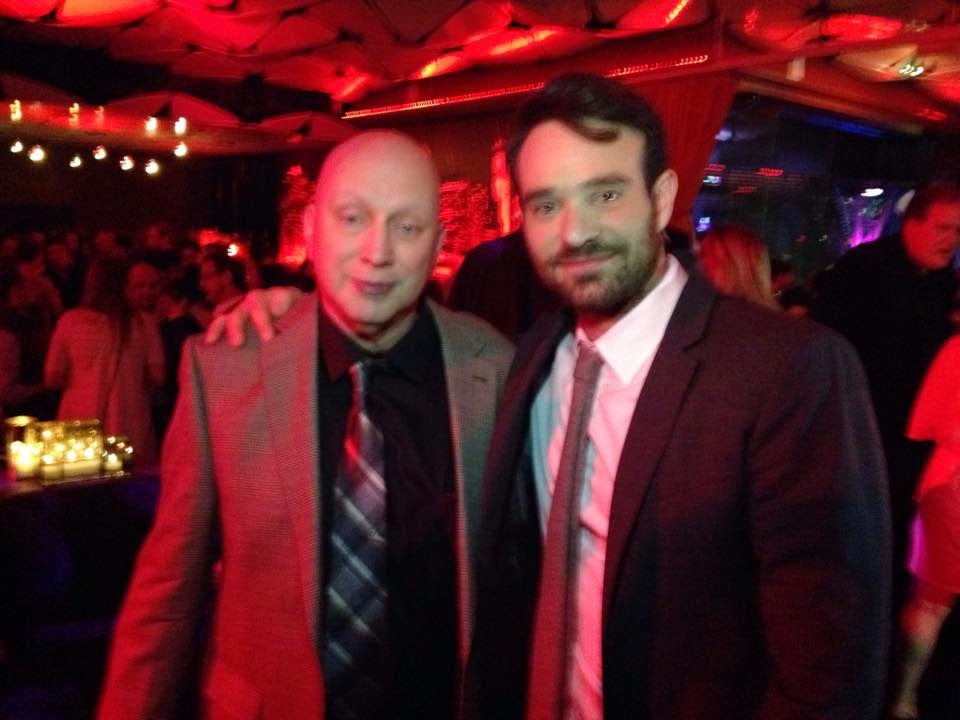 Johnson: And you were able to meet Charlie Cox, the actor playing Daredevil. What was your impression of him on the screen and in person? Does he live up to the persona of the Man Without Fear?

McKenzie: On screen, Charlie captured the essence of Matt Murdock/Daredevil perfectly. Off screen he’s charming, gracious, and even mugged for a few photos with the likes of me! Hopefully that won’t affect his career too negatively…

Johnson: Who else did you meet from the show at this event?

McKenzie: Besides Charlie, I met Skylar Gaertner who portrayed young Matt Murdock, and, from Marvel, Joe Quesada and Jeff Loeb!

Johnson: I know you can’t give anything away, but what was your impression of the episodes you saw? Is this series going to be true to the comics?

McKenzie: We got to see the first two episodes. They were both very true to the spirit of the comics. I think fans of Daredevil will be very happy with the direction the series is heading as well as the characterization. There’s enough of a “back story” to establish the characters and keep it interesting without bogging down the storyline, and just the right amount of Daredevil action. The stories are character-driven. I like that. A lot.

Johnson: I know movies and television shows always take bits and pieces from the various incarnations of superheroes. Was there anything on the screen that you saw that you could point to and say, “That’s mine. That line is one I wrote or that action is what I would have that character make.”?

McKenzie: No specific lines of dialogue particularly jumped out at me as mine from the comic book scripts. Lots of actions tho, that I would (and did) have the characters make.

Johnson: In spite of the trip to the West Coast, you still kept busy with your work for Charlton Neo. You have some big projects coming up. First off, there is the reboot of Yellowjacket. Tell us about that.

McKenzie: The original Charlton Comics first comic book was Yellowjacket, an anthology of superhero and horror stories launched September 1944. Artist Rodney Bennett and I have dusted off the old character, modernized him some while at the same time trying to very much keep the “Old School” magic that made comic books fun. If you want dark, grim, violent and depressing comic book superheroes, then don’t waste your time on Yellowjacket. If, on the other hand, you’d like your heroes to be…well…heroes again, then you just might like the new Yellowjacket! Rodney and I are working on the first adventure now. And if will appear either in the pages of The Charlton Arrow or as a weekly PIX-C Sunday Funnies webcomic! 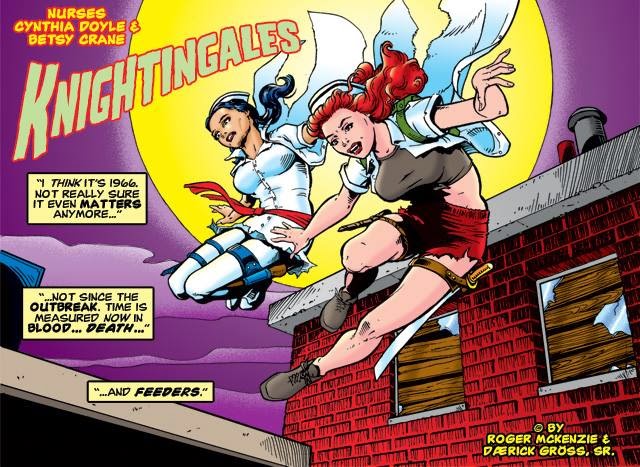 Johnson: And then there is Knightingales, which you mentioned. Tell us about that.

McKenzie: Here’s our tagline: “First do no harm. Then try to survive. Nurses Cynthia Doyle and Betsy Crane--Knightingales in a world gone horribly wrong...” Artist Daerick Gross, Sr. and I will be debuting Knightingales as a weekly PIX-C Sunday strip beginning 4/12/15!

Johnson: Sounds great! So that is something else Arrowheads can look forward to this weekend. And finally, when do you think you’ll be invited to your first Hollywood premiere for a Charlton Neo adaptation?

Posted by Paul Kupperberg at 6:06 AM