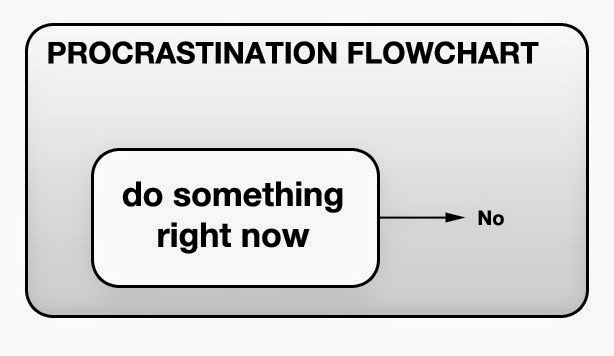 I’ve been meaning to write this blog for a while. But, ironically, I kept putting it off for other things. Like the latest spellbinding episode of Jerry Springer. Or checking Facebook because surely there’s been a new kitten video posted since the LAST time I looked--five minutes ago.

Procrastination. It happens to many of us. Maybe most of us. Because time is our best friend…and our worst enemy.  And, if you are a freelance writer or artist, procrastination can be a back breaker.

Why we procrastinate would take a book to explain. A large book. I’m not going to explain the whys…but give you a tip or two on how to overcome the inertia of getting started. And dealing with the dreaded “Blank Page Roadblock.”

You will face it head-on. Probably already have many times. The empty word processor screen with the blinking cursor. Blink. Blink. Blink. Waiting for you to write something. Daring you to begin. Reminding you of the last time you tried and how badly that worked out. Or that blank and pristine art board. Reminding you there’s still so much you don’t know…how much you still need to learn.

Except tomorrow winds up being just like today and pretty soon all the yesterdays of procrastination pile one on another until you spiral downward and your dream of writing or drawing comics begins to dim. To fade away, slowly but surely. And the doubts begin. Sure you want to do this. You know you can, And you will, you tell yourself with steely-eyed determination…

…later…
© Roger McKenzie
Posted by Paul Kupperberg at 6:05 AM