Support Your Local Filmmakers, or, Charlton Comics: The Movie

It's pretty remarkable when you stop to think of it: it's been just a little over a year, in August of 2014, since filmmakers Keith Larsen and Jackie Zbuska cornered me at my table at the Connecticut ComiCONN and started gushing about the panel I had moderated the day before. Needing a place to rest their convention-weary tootsies, Jackie and Keith settled into seats at the back of the room where I was speaking with guests Denny O'Neil, Jose Luis Garcia-Lopez, Frank McLaughlin, and Bob Layton about our long-ago shared experiences at the defunct Charlton Comics, formerly of Derby, Connecticut.

The upshot of their gushing (and, I add modestly, it was a great panel, especially if the reaction I was receiving was any indication) was that they wanted to make a documentary about Charlton Comics, the whole kit and kaboodle, from its start behind bars to its offices in a bowling alley to its slow, lingering death and recent resurrection. Would I be interested in helping, either by being interviewed or introducing them to people to be interviewed...whatever.

Sure, I said. Be happy to do what I can. And then I expected never to hear from them again. I mean, I get hit up several times a month by email or at conventions to take part in some grand scheme--a book, a movie, a start-up something or other--and they never, I repeat never, come to fruition.

Shows what I knew about these guys.

One year later, Jackie and Keith are friends and I've become somewhat involved in Charlton Comics: The Movie, from being interviewed for the film's trailer (near the site of the old Charlton Publications factory and offices) to moderating the panel that featured the world premiere of said trailer at the 2015 Connecticut ComiCONN (which becomes TerrifiCon in 2016) to traveling to Rhode Island with them next month (Sunday, November 8) for the Charlton Comics: The Movie panel at RI Comic Con (at 12:15 pm)...

...And did I mention the new Indigogo fundraising campaign that just launched? You can check it out here, including the aforementioned trailer...and while you're there, please, please, please contribute to help make the dream of Charlton Comics: The Movie a reality. And I'm not just talking about the dream of my one chance for stardom ("I'm ready for my close-up, Mr. Larsen!"), but of the chance to tell a story about the comic book industry that we only thought we knew! The stories that producer and ace researcher Jackie has been uncovering are unbelievable...and those are just the ones that she can tell!

Sure, the perks being offered to contributors are really cool, but what's even cooler's the opportunity to be a part of history in the making.

Make mine Charlton Comics: The Movie! 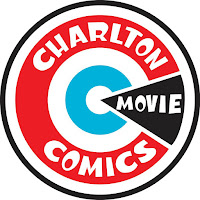 Posted by Paul Kupperberg at 3:24 PM