Aloha, romance revelers! Shane “Sweet Somethings” O’Shaughnessy here for the first time to bring the love to the Charlton Neo blog with reviews of that oft forgotten genre that flirted with the comics market for forty years! I’m going to sling you the salacious stories straight outta the pages of Charlton’s line of romance comics that I continue to ravish, er, collect for your pleasure! We’ll experience tales of woe and woo, worry and wrongdoing, double-crossing double dates, all for that final kiss firmly planted in every last panel! From the 40’s thru to its last breathy gasp in the 80’s, Charlton supplied so many saucy strips that we’ll have no trouble keeping it up for a long time! 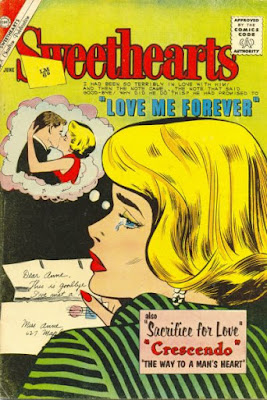 For our first installment, I’ve decided to pick one from a pile of recent acquisitions, Sweethearts #60 from June 1961. The early 60s comics maintained the clean-cut boys and doting darlings that was prevalent in romance comics since the 40s, not yet getting into the “swinger” scenes that would dominate the stories in later issues. Typically, the men were all well-dressed businessmen with an eye on the prize of some lucrative job and the women generally grappled with the idea that independence and singlehood as a burden that must be remedied ASAP. (It’s here that I’d like to put forth that I do not support nor agree with these antiquated heteronormative ideologies when it comes to actual real-life relationships but am able to view such simplistic storytelling with a healthy heap of humor as a bizarre artifact of a past that I’m glad we have culturally grown out of. That, and because if I did, I wouldn’t be married to an incredibly talented lady who makes twice as much as I do which allows me time to write these silly blogs!)

According to the fine folks at Comicbookplus.com (where you can read this particular issue for yourself), this issue is attributed to “Va-va-voom!” Vince Colletta and his team of apes, giving us four whopping tales of whimsy, “Love Me Forever,” “Sacrifice for Love,” “Crescendo,” and “The Way to a Man’s Heart.” Guessing by the titles, the first is about vampires, the second about Satanists, the third about the amours of Beethoven, and the last is some sort of Fantastic Voyage deal. Let’s find out!

After a cover featuring a goopy-eyed woman clutching a “Dear Anne” letter, we find the inside cover that hosts two ads, one for a voice recorder that etches into vinyl (which I know more than a few underground artists who would destroy their laptop for) and an ad for a 4-piece matched set of luggage! This knowledge will prove important later as the products find their way into the stories! It makes me wonder if the writing process for these tales was simply about finding ways to incorporate their advertiser’s products into a narrative… probably.

Following a banner promising us that “Charlton Comics Gives You More!” we head into our first short, “Sacrifice for Love!” We are greeted with a splash of a shifty-eyed middle-aged man casually strolling by our kissing couple while thinking to himself how amazing “Young Marsh,” our finely-suited hunk, is doing for himself, noting that the young’n is making more than he is. We never see this guy again and can only assume that he goes home and cries himself to a cold, bitter sleep.

Through a poorly placed narrative box, we learn from our heroine that she and Greg were "hayseeds" from upstate New York, that they’re both college educated, and she’s given up on anything she’s learned and her diploma to be married to him as he pursues that cheeriest of jobs, an ad executive! Following the slimy trail of other ad execs before him, Greg tells his wife that she’s got to be the grease in the wheel to get him a promotion by landing a deal with scum-of-the-earth, Anton Rupel. Greg really hates this guy, nearly frothing at the mouth as he calls him a “cannibal.” Our still-nameless heroine suggest that, uh, maybe he should let one of the others at his office take the account since he loathes Rupel so much, to which he replies that he would “scalp” them! In short, Greg is terrifying. 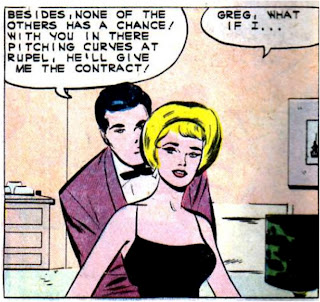 When she tries to speak, he shuts her up by kissing her next panel. Trust me when I say this is a sorry theme that runs through a lot of romance comics as it is usually followed, this time included, when they say, “I didn’t care! Being in his arms was worth it…” Hey, maybe she gets a kick out of it? Maybe this is why they’re married: they’re cons who know how to chump rich weirdoes out of their money? They probably leave a trail of broken men, like the one on the splash page, in their wake! Perhaps she was about to say, “Greg, what if I… laced his drink with arsenic?” Reading as many romance comics as I have, my mind likes to fill in the details that I’m sure the writers were hinting at.
The next scene is the party at Greg’s company president’s house where Rupel directly propositions our heroine while Greg leers on in the background. Baiting the obnoxious pervert, she sets up a dinner date over at her and Greg’s place the following evening. “I made a conquest...” she gloats to herself while her husband gushes with gruesome glee!

But alas, dear reader, it’s that point in the story where our heroine’s pesky conscience pops in and she begins to doubt the plan in play. What if this ruse just turns them into horrible people? What if they’re already horrible people? Greg brandishes her name, Edie, for the first time in this story as he admonishes her for her disgusting display of last minute morality! 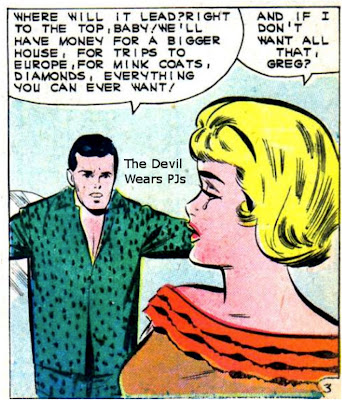 Through the tried-and-true method that every American lad knows, Greg places his face uncomfortably close to Edie’s and convinces her that everything is all right. All is not right as Edie stays awake all night thinking of how much happier Greg would be back in their “village” in Upper New York (because at anywhere not the City in New York you can still buy torches for the bimonthly witch hunt) working for his dad’s firm but he’s too stubborn and fetishisticly entwined with the human wart, Rupel.

The next morning, Edie pops one of her Floozie’s Little Helpers and gussies up their house, making sure their wonder-box, a tape recorder, gets center stage because “…it helped amuse guests when parties got dull!” Generally less questions were brought up afterwards with a tape recorder than Greg’s party favor of lining the house with plastic and bringing out his hatchet. We find Edie hunched over the box as Greg stands near the blinds, shoulders stiff with his arms at his side, twitching hands hidden from view, muttering how much of a “worm” Rupel is. Slyly, Edie eggs him on, asking him what in particular Greg loathes about the giant pus-sack, which leads to one of the angriest panels I’ve found in a romance comic... 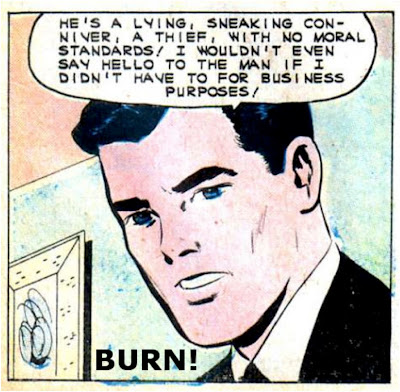 Patrick Bateman, I mean, Greg continues his tirade according to Edie’s narration as she cleverly manipulates the recorder with her dirty dexterous hands. Greg admits that he’d tell the slime ball what he felt “if he wasn’t important to the firm!” But his smoldering is interrupted by the fat man arriving to stink up their house with his putrid musk. Greg puts on his best host mask and suggests that Edie turn on the recorder so they can listen to the swank dance music they’ve pirated from the radio. Or maybe they have some sort of jug band they’re a part of, being hayseeds and all. Yet instead of the backwoods twang of banjo finger picking, Rupel is slapped in the face with Greg’s vitriol from the panel above! Rupel is aghast and scurries back to his sweaty money pit without a word.

Greg’s life is shattered! There goes years of hard sniping to get where he is! There goes the swank apartment and the maids doting on their every need! There goes the diamonds and the furs! Edie has left him a shell of his former self! “Did you hate this life that much, Edie? Or is it me you hate?” Greg pleads with the mischievous imp he once called wife! She responds by telling him that she didn’t want anyone else to destroy his life, so that’s why she had to do it herself! The comic ends with a perplexing sentiment… 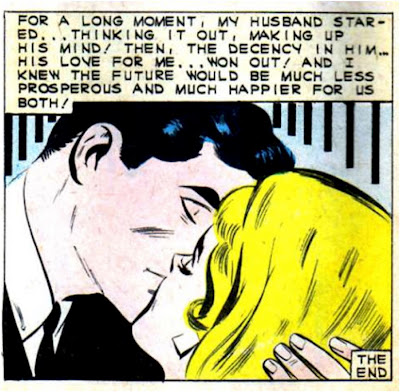 And so, our psychotic couple’s tale gives us the heartwarming moral: Destroy everything with the fire of love!

Stay tuned for the rising action of "Crescendo!" in the next Kissable Comics!
© Shane O’Shaughnessy
Posted by Paul Kupperberg at 11:50 AM