Memories of Charlton Classic Past 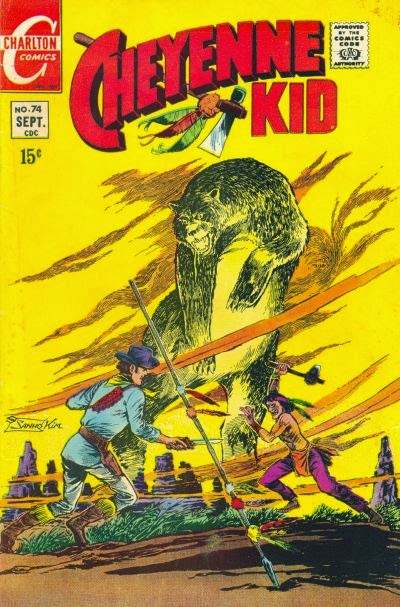 I really can’t remember exactly what was my first ever Charlton Comic that I read. I was always reading comics or something as I grew up. I can remember the first Charlton Comic I ever bought with my own money.
It was Cheyenne Kid #74 (September 1969).  The beautiful Sanho Kim ghost bear cover! As a Western fan, this cover leapt off the spinner rack at my local store (not a comic shop, a general store that sold everything from groceries to hardware and comics). It excited my 10 year old eyes and mind!

I had read the Cheyenne Kid and the rest of the Charlton Westerns before, getting them in our weekly Saturday afternoon comic trade at the local movie theatre. I liked the character and the books, but as more of a DC and Gold Key fan, I purchased more Superman, Batman, Turok, Donald Duck, and Tarzan than any of the Charlton titles. But this issue really caught my eye and I started adding Cheyenne Kid to my monthly comic buys, soon followed by Billy the Kid and the other Western titles. It wasn’t long before I also started looking at the race car books and, of course, the horror titles. When I finally discovered the back issue comic market, I started getting the Action Hero books, as well as the remaining war books.  The distribution of Charltons in my area was a bit spotty, sometimes going a few months before seeing a new issue while skipping a couple issues in the run.

As one grows older, one’s taste change. I did start buying some Marvels along with my regular DC’s and some of the few remaining Gold Keys that were still appearing. I still bought Charlton–Space 1999, Six Million Dollar Man, and, of course, those horror books filled with all those Ditko stories. Add to the back issues that I was slowly acquiring (hard to do on a paper boy’s earning, even supplemented by other jobs). When I finally started to earn a steadier income in the late ‘70s and early ’80, I was finally able to get to books like Fightin’ 5, Peter Cannon-Thunderbolt, Captain Atom, and the Dan Garrett Blue Beetle. I have never regretted it!!

Sadly over the years, life and those pesky things called bills intruded into my comic buying and collecting and on a couple of occasions I was force to part with sections of my collection – including most of my Charlton’s and copy of Cheyenne Kid # 74!  But I am slowly getting them back.

Now I have the chance to get in on the ground floor (or the basement) of the return of Charlton with Charlton NEO!

I don’t know if what I might contribute to Charlton NEO will be as fondly remembered in the future as some of the stories I read in the past. One can only try!
© Roger Keel
Posted by Paul Kupperberg at 6:13 AM