The Importance of Being Charlton 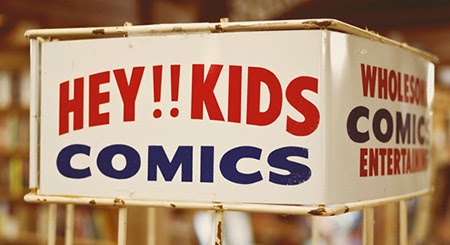 If you told me a year ago that I'd be writing a new science fiction series* for Charlton Comics, I'd have started looking around for evidence that I'd slipped into a parallel universe. After all, Charlton Comics stopped publishing... how do we put this into proper cultural perspective?... about a year after Scarlett Johanson was born in 1984, three years before Emma Stone's birth in 1988, and almost a full decade before Justin Bieber first graced the world in 1994.

Charlton Comics evokes different responses in different people. To me, growing up in suburban Montreal in the mid-1970's, Charlton was the oddball, Brand-X option on the "Hey Kids, Comics!" spinner rack. It was neither Marvel-fish nor DC-fowl, and I’d never know from month to month whether Charlton titles would even show up at Mackle Handy Store, the closest approximation of a comic shop you were likely to find in 1975. Charlton's comics were undeniably weird, printed on paper that felt funny under my fingers (the covers in particular were kind of rough and grainy) with colouring that was (to be charitable), muddy, leaning heavily towards shades of orange and brown previously unknown to science.

Now, some of my Neo colleagues are true-blue Charlton fans, collectors, obsessives, even veteran writers or artists, but that's not the case for me. My approach to Charlton Comics then was pretty much the same as my approach to cookies, detergent and software now: I've always had a weakness for the oddballs, the off-brands, the weird stuff on the bottom shelf that no one else notices. That's why I always bought some Charlton titles mixed in with my usual allotment of Justice League, Avengers, Batman, and Spider-Man. Even though their ink smelled funny and their covers were gritty and they had no superheroes, to me Charlton represented a breath of fresh air. Even then, as superhero-mad as only a 13-year old can be, it was refreshing to have a change of pace, something different, a logo that didn't say "Marvel" or "DC" on the upper left-hand corner of the cover.

By then Charlton was already well-past its late 1960's heyday, and had largely given up on producing anything based on original, in-house properties. A few years earlier they surprised everyone by popping out an E-Man here and a Doomsday +1 there, but even that brief resurgence was over by the time I was a really confirmed comic book fan. Billy the Kid and some of the horror titles continued to stagger along, but to readers of my generation, Charlton Comics pretty much began and ended with licensed TV tie-ins: The Six Million Dollar Man, The Bionic Woman, Emergency, Space: 1999, plus one or two other titles I can't remember anymore. (Yes, it was a pretty bleak landscape when two superhuman cyborgs from TV represented an "alternative" to superheroes, but in 1975 you took what you could get.) Charlton also represented something very important to anyone with aspirations of one day writing or drawing comics: It was the triple A farm team, somehow less intimidating and more approachable than the major league bullpens at Marvel and DC. When DC and Marvel gave up on virtually every genre except superheroes, Charlton still had a smattering of horror, war, and Western titles. When DC and Marvel largely abandoned anthologies and short backup stories, Charlton was still doing them; so people like me could imagine one day breaking into the field by writing a six-page horror or war story. How much more likely was that than being handed a book-length Green Lantern or Spider-Man assignment for your first try? In fact, for at least a couple of comic book generations, doing your obligatory stint at Charlton was pretty much the only way to demonstrate that you had the chops to work for the "big league" publishers. That's how greats like Jim Aparo, John Byrne, Dick Giordano, Joe Staton, Mike Zeck, Steve Skeates, Paul Kupperberg and Nicola Cuti got their starts. I could go on and on.

I missed the end of that era by a whisker. By the time I was writing professionally, Charlton was on its last legs, and I broke into the field the 1980's way, in my own self-published black-and-white comic, Northguard. I later went on to write for a bunch of other publishers; First Comics, Caliber Comics, Renegade Press, Tru Studios, and Broadway Comics among them, and they were all (well, mostly all) great. But as I got older, I couldn't help feeling that I'd missed something with the disappearance of Charlton, that I'd skipped an important step in my professional development. That wasn't entirely rational, of course, but it was how I felt.

Don't get me wrong, I have no illusions about the original Charlton. The company's origins were shady (the founders met in prison, for God's sake!), and they were notorious from the beginning for paying their creators bargain-basement, lower-than-living-wage page rates, while expecting (and, surprisingly, usually getting) first-class work. They may have had a hands-off editorial approach that encouraged creativity and diversity, but they were also known in the field as followers, not leaders, with a "throw everything at the wall and see what sticks" editorial approach. It's for that reason that editorial director Dick Giordano reportedly finally left Charlton for the greener pastures of DC, sometime after the collapse of his great "Action Heroes" experiment in the late 1960's.

All that said, Charlton's disappearance in 1985 somehow left a real gap in the comic book ecosystem that innumerable new startups, from First Comics to Eclipse, Dark Horse, Image, IDW and all those others never quite filled. That's why I eagerly came on-board, and I'd venture to guess, that's why so many of my talented colleagues (many of them legendary veterans of the field I grew up reading) are also happily throwing in their lot with Charlton Neo. I mean, it's a comic book publisher that literally grew out of a Facebook discussion group right in front of our eyes. How often does that happen?

If Mort Todd, Paul Kupperberg, Roger McKenzie, and the other new secret masters of Charlton had called the undertaking something else, if they hadn't explicitly modeled the new Charlton on the best of the old Charlton's legacy – while leaving the bad parts in the dustbin of history, where they belong – I don't think this community of creators would ever have gotten off the ground, because that's what it is: Not a company in the traditional sense, but a community. We all come from different generations, from different artistic backgrounds, even from different countries, but I think it's fair to say that for most of us, Charlton Neo somehow feels right, like we're coming home.


Mark Shainblum is the co-creator of Northguard and he is currently co-editing the prose superhero anthology Superhero Universe: Tesseracts Nineteen from EDGE Publishing. His website is www.shainblum.com.
*More on that later.
© Mark Shainblum
Posted by Paul Kupperberg at 5:27 AM