You Never Forget Your First 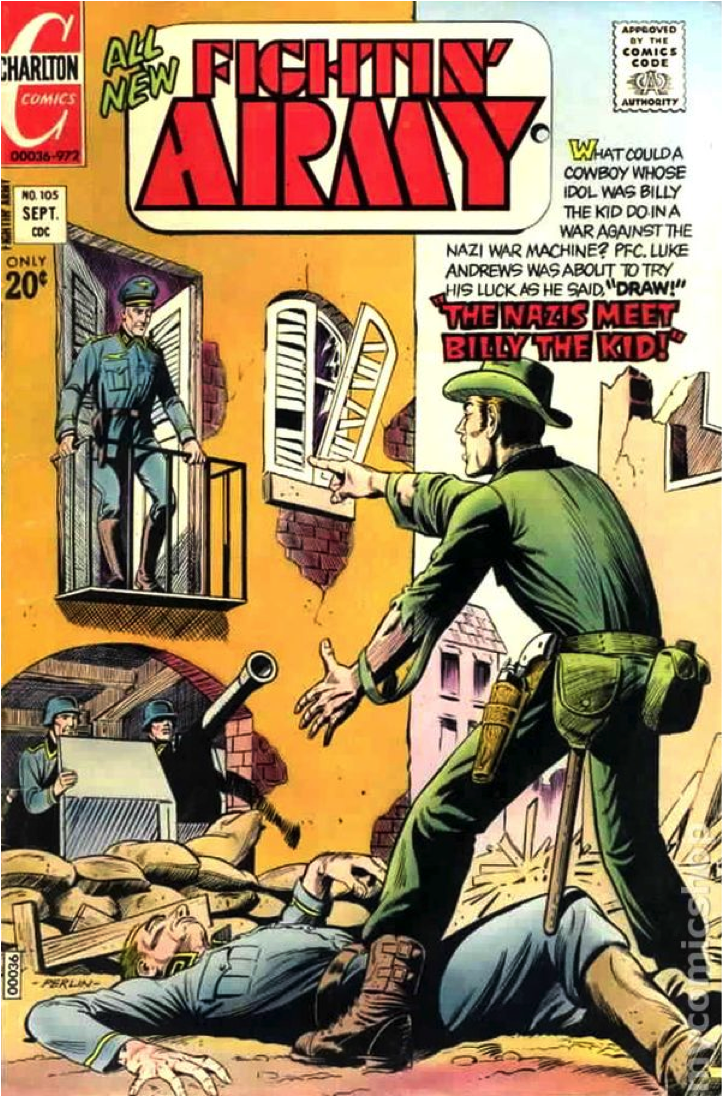 Hello Arrowheads and Neophytes! It’s everyone’s favorite late night radio host, Dean Compton here, and it is finally my turn to take over this Charlton Neo blog for a bit! For real though, big thanks to Paul Kupperberg and the rest of brain trust here for letting me intrude upon y’all and tell a story or two about my first Charlton.

The year was 1987, it was Christmas, and it was rural Arkansas. I had just turned eight back in October, my first birthday outside the state of Missouri, which I had basically traded for misery. Of course, being a second grader, said trade was as beyond my control as much as who will be the Prime Minister of Burkina Faso is beyond yours. Actually, since they have coups all the time in places like Burkina Faso, you probably have more control than I did. Just get there, stay alive, see what happens, and hell, you could be the Prime Minister.

I would be staging no coup in Arkansas at that time though. We had moved down there after my parents’ divorce so that my Mom could move in with her boyfriend, who would eventually become my stepfather. My Dad fought against this, but there was very little he could do. I miss him terribly. I missed my grandmothers, my friends, my school, and much to my shock, there was no Kansas City Royals baseball on TV down in Batesville.

What there was, though, was abuse and neglect. Lots of it. So much so that were I to start going into it in detail here, not only would we never get to my first Charlton, but we’d also never get to another post because said post would eat up all the bandwidth, Paul would get mad at me, and I’d never get another chance to play here, so we won’t be doing that.

Obviously, I was sad, and I felt very alone. Everyday meant a new horror, whether it was actual physical torment or the anguish felt when being shamed by my fellow schoolchildren due to my shabby clothes or lack of lunch money. I found refuge where I could, and one place was in war fiction. I didn’t really care what kind of war fiction. I watched every war movie I could (even stuff like Platoon, which I was obviously too young for.)

I also read some war comics. I had a few Sgt. Rock’s, and I also loved the Haunted Tank, but those are the only two characters I can recall from this era, at least they were, until Christmas morning 1987.

Just like every other Xmas-celebrating kid in the world, I bounded down the stairs to the tree as fast as I could, ready for the bounty that came with being good for the whole year month of December. Remember how hard it was to be good to get those presents? December might as well have been a year, with how long it seemed to take to get from December 1st to the 25th. I had been decently good, and I got to the tree and saw…nothing.

I was heartbroken, as any child would have been. My brother had followed me, and he let out the kind of shriek that a victim in one of Grimm’s Ghost Stories would make ‘ol Hephizbah cringe. My Mom started yelling from her bedroom to “GET YOUR ASS BACK UPSTAIRS! SANTA CLAUS AIN’T BEEN HERE YET!” About 20 minutes later, my mom then screamed to us “SANTA CLAUS HAS BEEN HERE! GET YOUR ASSES DOWN HERE!” So that’s how I learned there was no Santa. Thankfully, that is also the day I learned that, yes, Virginia, there is a Charlton.

In my stocking were several war comics, one of which was Fightin’ Army #105. I remember thinking that this was different than the war comics I had seen before. Not that Sgt. Rock and Haunted Tank (along with the rest of the DC War Comics cast of characters, which I am sure I read but simply do not recall) were awful, but even as a second grader I could tell that this Charlton was special in an off-the-beaten path sort of way. The pages were different than other comics. My young eyes lit up, as I knew this was cool in an underground sort of way. Of course, I was not a hipster in second grade, so I had no idea what underground meant. Basically, I was Charlton when Charlton wasn’t cool.

The comic book, because this is an article about my first Charlton, after all, is amazing in all the ways you’d expect. Don Perlin drew the great Billy the Kid in WWII story that adorns the cover, and my second favorite story of the issue, “Merry Christmas, Cookie”, was drawn by Jack Keller. The Grand Comics Database doesn’t say that Joe Gill wrote these stories, but I’d say it is a safe bet that he did, seeing as how this was published in 1972.

“Merry Christmas, Cookie,” set in the Korean War, is about a group of soldiers who missed out on Thanksgiving dinner due to their position on the front line. The sergeant in charge of the chow crew, Guts Flinn, is informed that since the 2nd platoon cannot make it from the front line to eat the chow, Guts and his crew will have to bring the goods to the 2nd platoon. Guts protests that he and his cooking crew aren’t combat soldiers, but he’s threatened with reassignment to a foxhole if he doesn’t obey orders. That’s all he needs to tell his men to get the trucks loaded, but he tells them to bring weapons just in case they get attacked. On the way to the front, he reveals that he is a cook because of his fear of battle.

Guts gets the trucks to the front just in time to be attacked, but he finds the bravery he thought he didn’t have; in fact, his valor inspires the 2nd platoon to rally and get their Christmas dinner!

The centerpiece of the comic, though, and the one that touched me the most, “The Nazis Meet Billy the Kid,” is nothing short of amazing. Perlin’s work is great here, and he masterfully depicts Luke Andrews, the WWII soldier who can shoot as well as Billy the Kid.

What really made this stand out to me though, was how and why Luke fought back against the Nazis after being separated from his fellow American soldiers. Despite being outgunned, outnumbered, and overpowered, he kept fighting back in order to help the citizens of an occupied town, who are being herded into the streets by the Nazis to keep the Americans from strafing or bombing the village. He strikes from clandestine spots and saves many folks from brutal oppression despite overwhelming odds.

Obviously, with how my life was, that message spoke loudly to me. I recall reading this in the midst of constant trauma in my life, and it was one of many things, including many comic books, that gave me courage and strength in a time it was hard to find. I found inspiration not only in Luke’s (read: Billy the Kid) attempts to fight back, but also his reason for doing so. It made me want to be the kind of person who helped folks who faced tremendous adversity.

I am in the midst of doing a BTK in WWII script for Charlton Neo (I promise the script will be done soon, Rog!), and while I hope no one is going through the type of situation I had to, I am not so naïve as to believe no one is. Maybe my story will help them. Hell, maybe another story from Charlton Neo will. You never know what will grab someone and propel them through tough times.  All I know for sure is that somewhere out there, a Charlton Neo book is going to help someone through tough times, and isn’t it nice to know that even though these are just comic books, they can be a lifeline to a scared and lonely person who needs a way to cope. Thanks, Charlton.

Thanks to Paul, Rog, Mort, Dan, Jennifer, Fes, and the rest of the Charlton Neo gang for the opportunity to write this, and if you get a chance, please check out my live radio shows on VOC Nation. Compton After Dark is on Sunday nights at 11:30 PM EDT, while my girlfriend Emily Scott and I do Her DorkWorld, His Dork World on Thursday at midnight! Also, if you like 90’s comics, check out the only blog on the web dedicated solely to that 10-year span, TheUnspoken Decade!
© Dean Compton
Posted by Paul Kupperberg at 5:26 AM