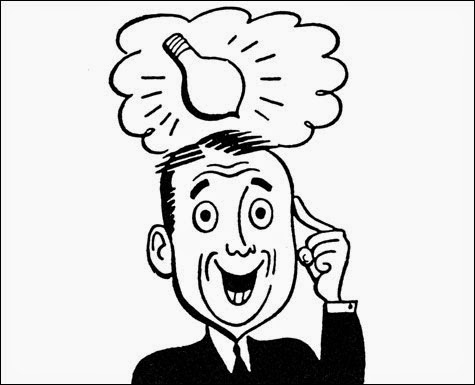 Me: “If you have to ask, I think you’ve answered your own question.”

Me: “All sorts of things. Novels, kids books, comic books.”

Them: “Really? Where do you get your ideas?”

Depending on who’s asking, I have a variety of answers, ranging from the snarky, “I subscribe to an idea service; every month they send me two dozen ideas and I pay them for the ones I use,” to the truthful (but not very helpful), “It’s my job.”

The actual writing is only a part of a writer’s job. While I wouldn’t go so far as to say it’s the easy part, it’s still only a part of the process, because before you write you have to have something to write about. Fortunately, having been at my job for a goodly number of years, I’ve gotten pretty good at the whole “getting ideas” thing which come, to me at least, in two distinct flavors: the complete, ready-to-write idea and the broad concept.

The complete, ready-to-write kind are, as you would imagine, the best kind. Those are the ideas which come--pop!--into your head, fully developed, with a beginning, middle, and end already in place. Sometimes, it just feels like all you’re doing is copying something you’ve already read or seen. These are, needless to say, the kind of ideas that don’t come near as often as you wish they would. I can only think of a handful of instances where this has happened to me, one time being in the early 1980s when, in search of an idea for a sword and sorcery concept for a DC Comics series, I came up with--pop!--Arion, Lord of Atlantis, about a sorcerer in the Atlantean end days.

That’s not to say Arion came completely out of nowhere. Knowing the editor of the Warlord comic was looking for a back-up feature to replace one that was spinning off into its own title, I had been noodling with S&S ideas for a while. As a result, Atlantis, sorcery, and a soupcon of Larry Niven’s classic The Magic Goes Away had been percolating in the back of my mind for a while, but I hadn’t really made any sort of effort to turn those ingredients into a concrete idea. Well, not consciously at any rate. So, when the big picture idea came to me--pop!--while I was in the process of doing something totally unrelated to writing or sorcery, it felt like I had given birth without having to go through the messy process of labor.

The broad concepts, the so-called the germ of the idea, is much more common and can come from anywhere and anything. In just the last week, some random lines from different movies I was watching jumped out at me as being perfect story titles. What stories they would title weren’t clear at the moment of impact, but pretty soon one of them joined forces with a little project that I’ve been working at sporadically over the last few months, that of using pieces of sculpture and paintings created by my late grandmother as the inspiration for short stories. The other will, eventually, find a home somewhere.

Another broad concept came to me listening to an interview with Ben Bradlee, newspaperman and friend of President Kennedy, on CSPAN. Bradlee spoke of a conversation he’d once had with JFK about this post-presidency and, without even thinking about it, I grabbed a pen and paper and jotted down the quote. That, in turn, became the beginnings of a short story that will, when I find the time, finish sometime in the near future.

I’ve found ideas lurking in conversations, in newspaper and magazine articles, in other people’s stories, and in looking out at inspiring views. I’ve had these ideas while actually searching for them for in the course of an assignment, and I’ve had them without any place in which to use them. I’ve been awakened from a sound sleep with them, and I’ve had them drifting off to sleep. Not all of them are gems, though, but the really good ideas are the ones you don’t forget, even if you get them when you’re half a sleep or don’t get a chance to write them down. The ones that slip away probably weren’t worth remembering in the first place.

Where do I get my ideas? I guess the truth is I get them anywhere and everywhere.