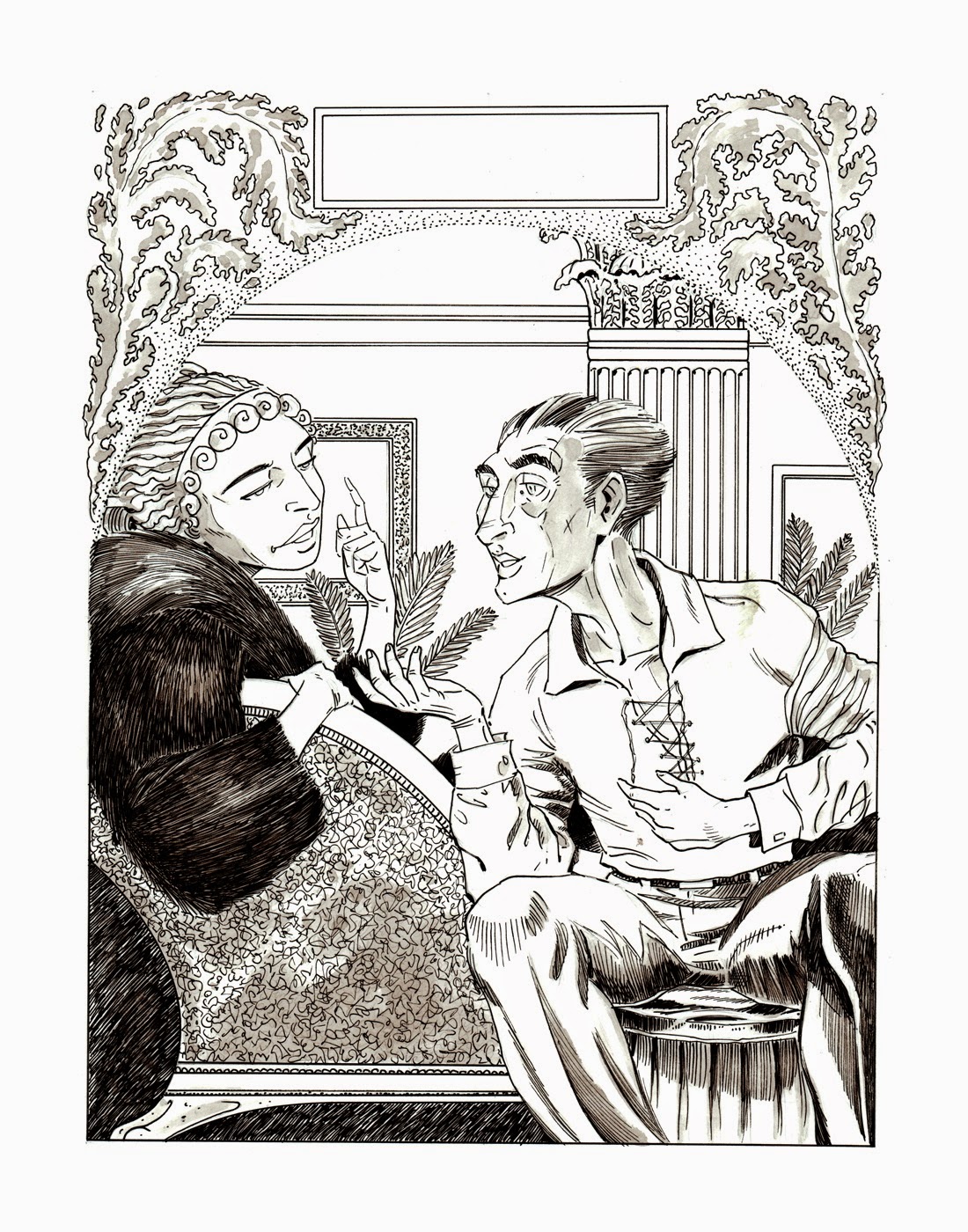 When Charlton Neo sent out a call for new talent to come join us in making comics, we were overwhelmed with the amount of submissions we received. The only thing that bowled us over more was the caliber of talent that wanted to join our ranks. Several artists really stood out in particular and over the course of the next few weeks, we plan to introduce them to you in a series of profile interviews. You’ll not only get to find out more about them, you’ll also get a peak at the artwork that won the editorial staff over.

Up first is an artist who we decided was perfect for the upcoming Charlton Pulp project. It is with great pleasure that we introduce you all to the Mann! Marvin Mann that is.

Dan Johnson: Marvin, tell us a little about yourself.  How did you become interested in art?

Marvin Mann: Oh, I think that just about everybody who draws has always drawn. Picking up a crayon is a pretty basic skill. I was drawing at four. I copied comic artists since the fourth grade, and started actually drawing a comic in high school.

Johnson: What projects you have worked on previously?

Mann: I never really drew a published comic until my mid-thirties when I was hired to ink The Trouble With Girls, Gerard Jones and Will Jacobs hilarious spoof, penciled by Tim Hamilton and published by Malibu Graphics. I followed that up with Flesh Gordon, Ape City, and Lizard Lady before leaving the field for about ten years. During my time in the wilderness I learned woodworking and furniture making, and then 3-D modeling and animation. 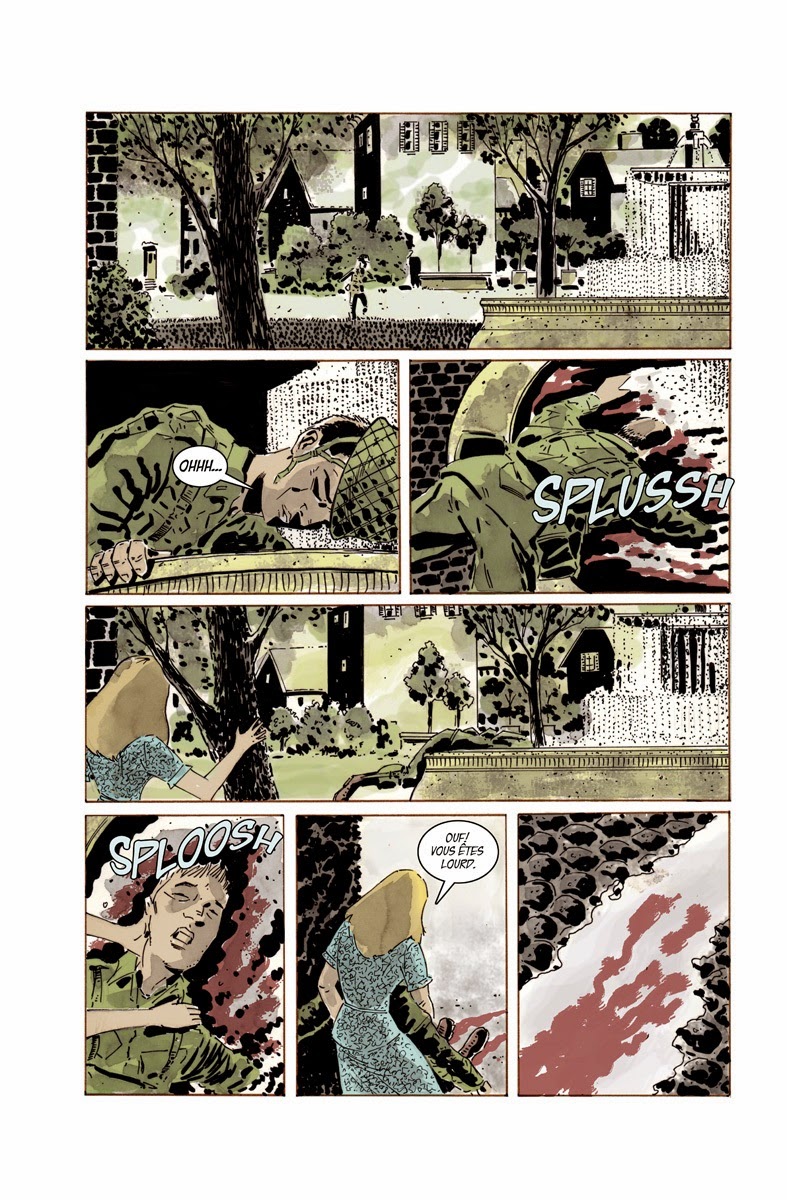 Johnson: Ten years is a long time to be out of the business. What brought you back to the industry and what have you done since your return?

Mann: I got drawn back in when I produced a comic strip using 3-D Studio Max for a book on interactive media. I got the bug again. The Internet proved a boon to me as I hooked up with other creators, creating a few mini-comics, and the drawing the web comic Arcana Jayne: Hair of the Dog for Lisa Jonte, and then the graphic novel The Lone and Level Sands with A. David Lewis. We self-published a soft cover version before Mark Smylie picked it up along with Mouse Guard and Robotika for Archaia. The Lone and Level Sands was the first of four graphic novels I drew that Archaia published. There was Inanna's Tears with Rob Vollmar, and The Some New Kind of Slaughter which I drew and co-wrote with Lewis again, and finally, The Grave Doug Freshley with Josh Hechinger. In recent years, I drew a number of shorter projects, mostly with Russell Lissau, and at the moment am back in web-comics drawing Love is in the Blood for Greg Carter. So web-comics, graphic novels, work for hire, mini-comics, even a comics for the iPhone. I've dabbled in a wide range of comics. A fuller list can be found at my website: www.cosmorynth.com

Johnson: Who were some of your inspirations as an artist?

Mann: Hoo-boy. I reckon I was starting to lose a bit of interest in comics about the time Neal Adams was making his splash, and his mix of realistic melodrama captured my attention as it did for so many. While I copied some of his drawings as a kid, I never saw myself as drawing in his manner. I loved Jeffrey Jones. And as I got older, Alex Toth, Hugo Pratt, Jose Munoz, Daniel Torres, Jacques Tardi, Gipi. Mike Mignola, Jaime Hernandez, Frank Miller have all exerted a pull as artists. Pablo Picasso, Paul Klee, Egon Scheile, Paul Gauguin. European comics much more than manga. What I prize, what I strive for in my drawing is a lively, fresh line and rich blacks. I like a looseness to art, and a simplicity. I like to have a sense that it moves. 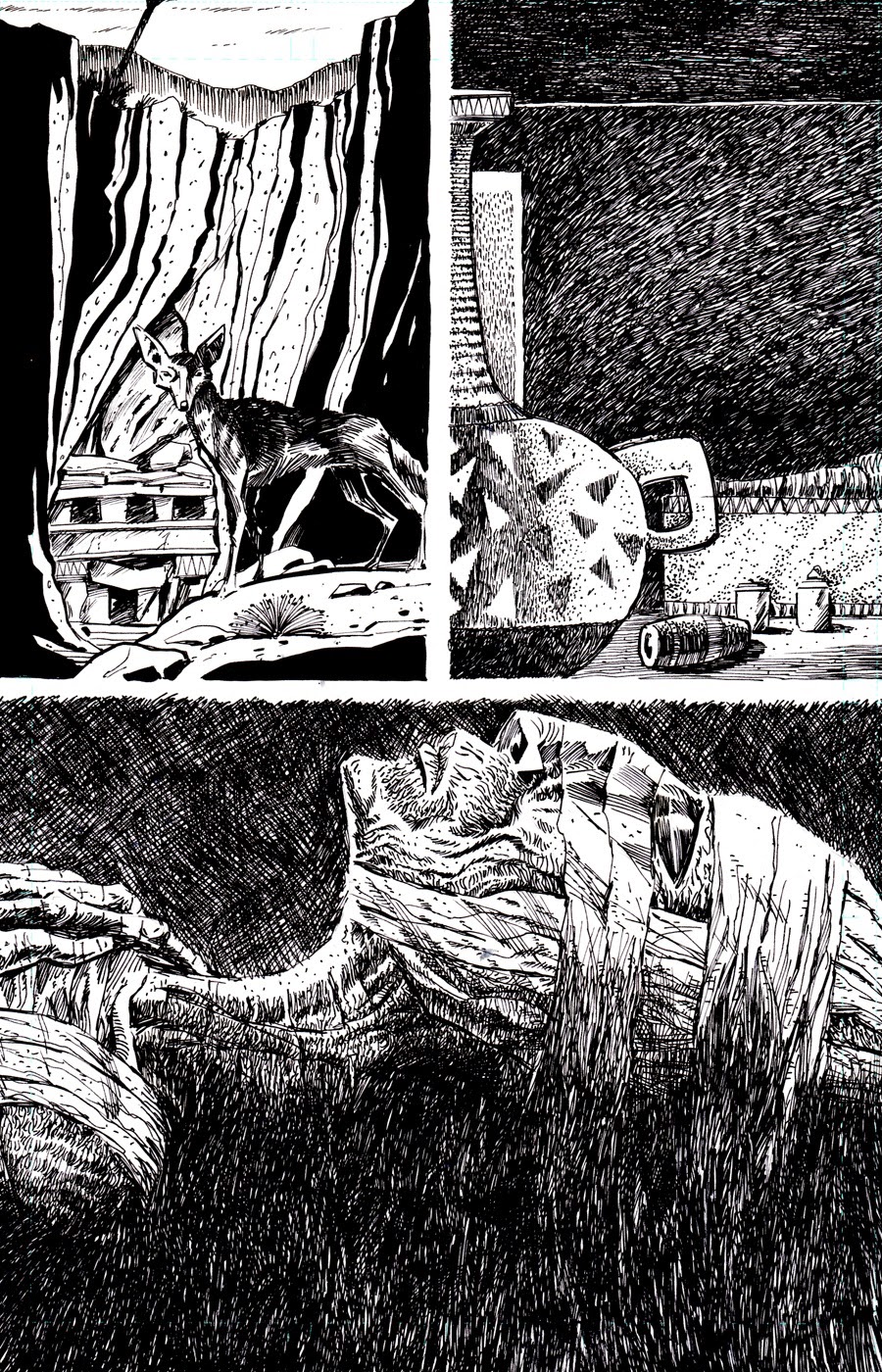 Johnson: How did you come to find out about Charlton Neo?

Mann: Facebook. My friend Daerick Gross posted something that popped up in my feed, and I took a look.

Johnson: What genres do you enjoy working in most?

Mann: Not sure it's a matter of genre so much. I started out thinking in terms of superhero comics, and it's still fun to draw Superman or Wonder Woman from time to time as a kick. But my style doesn't really lend itself to that so much. I like comics with heart. Of my graphic novels, three of them are what I might term "literary comics." They address quasi-historical/mythological/religious themes and I loved doing them. But the fourth, The Grave Doug Freshley was a Western and a buddy story about a dead cowboy and an eight year old wreaking vengeance on the ones what done them wrong, and it was a hoot and a half to draw. Russell has had me drawing World War II in a couple of our stories, but the first World War is a more appealing time for me, perhaps because I like Tardi. Part of what interested me in Love is in the Blood, which I am currently drawing three pages a week for, is that it is a love story, with lots of conversation and intimacy, plus a dollop of eroticism. I'd love to draw more romance comics.

Johnson: Okay. Lets break that question down a bit more. What do you look for in a story?

Mann: Here is what I look for in a story: I think of Stanley Donen's movie, Charade wherein Cary Grant and Audrey Hepburn are chasing after a valuable stamp, the MacGuffin, which propels the plot but that is otherwise unimportant; what the real story is about is the two of them learning to trust each other so they can fall in love. I like stories where the real story is about what lies underneath the plot contrivances. I want to draw stories that bring people together. And along the way, we have some fun. 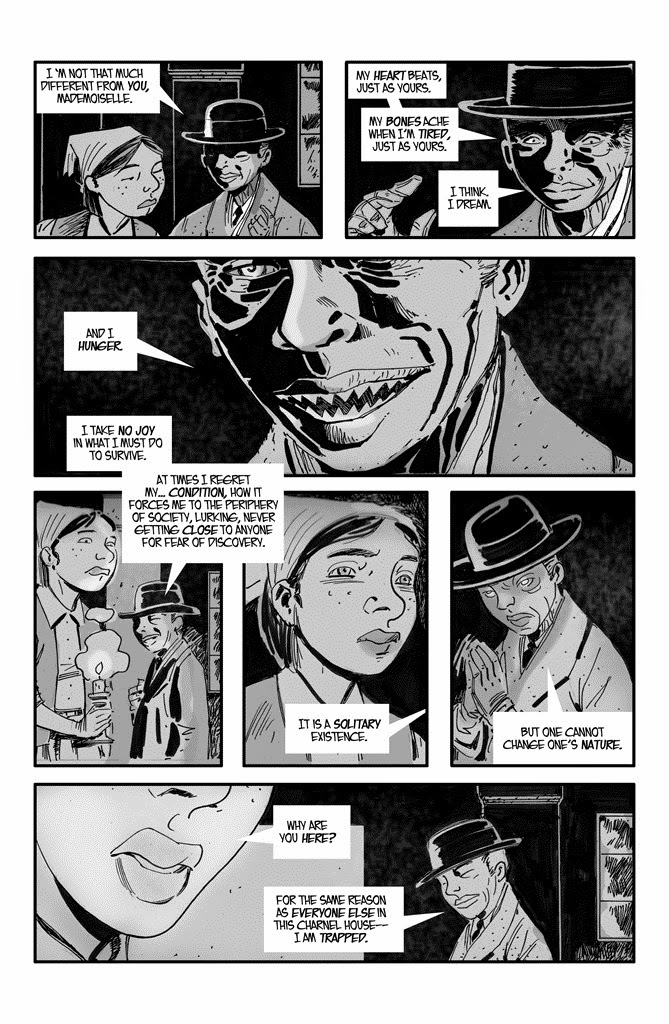 Johnson: Are there any projects you are working on now outside of Charlton Neo? Anything we should be on the look out for?

Mann: Go to http://www.loveisintheblood.com/  Also, my graphic novels are still available from Archaia. Russell Lissau sells some of the comics we've made together when he tables at conventions, which is regularly. Our last project together, Calypso, is scheduled to appear in a forthcoming book from Pop Goes the Icon. Also, Josh Hechinger has uploaded Okita and the Cat to Comixology. That is a nice 48 page graphic novelette that features some of his finest writing. And I have a few things that will remain up my sleeve for the moment.

Johnson: I’m sure you’ll have a whole new legion of fans once your work starts appearing in Charlton Neo books. Where can these folks find out more about you and your art? Do you have a website or Facebook page they can visit?

Mann: I occasionally post comics stuff to my Facebook page, but it's not a dedicated page. I do accept most comics related queries and dump you if you're an ass. My website is noted above: www.cosmorynth.com. I'm on Twitter as @mpmann3 but in truth I find Twitter boring and rarely think to check it. I gave up on Tumblr and closed that along with my Pinterest and Linked In accounts. I'm not sure why I haven't closed Twitter yet. No Ello page. But never fear, since much of my work the last ten years has appeared under the byline mpMann, if you Google that, interviews, reviews, art and publications pop up. 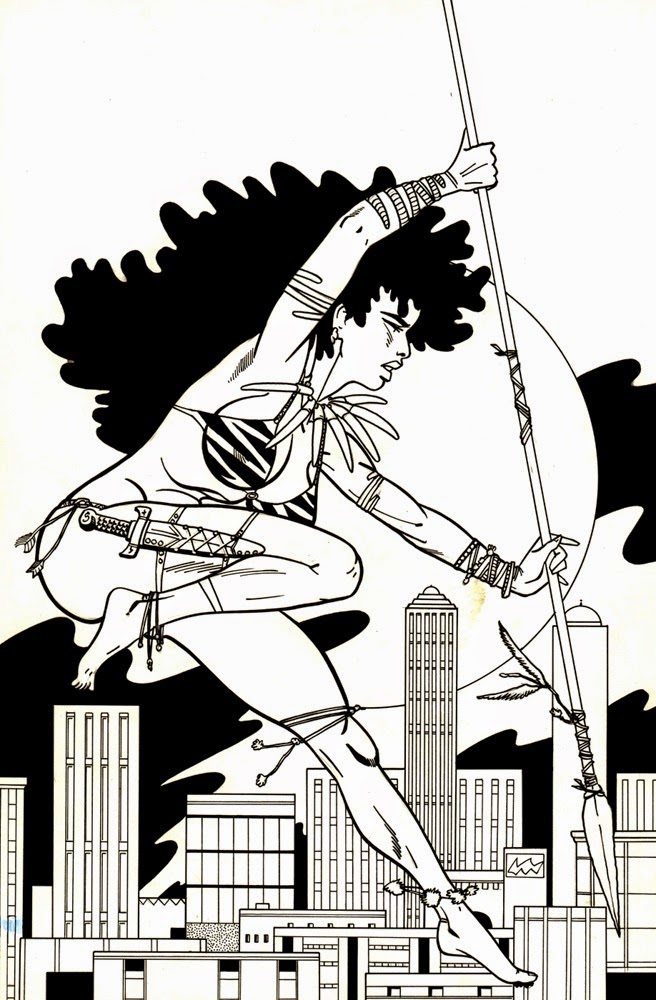 Posted by Paul Kupperberg at 5:33 AM