Back Where They Belong! Nick Cuti and Joe Staton Bring E-Man Home to Charlton When E-Man made his debut back in 1973, he was a huge hit with fans. Very quickly, readers of Charlton Comics took to him and the character became a cult favorite. Indeed, E-Man was so popular, he survived the decline and eventual death of the original Charlton line and went on to star in adventures published by First Comics, Comico, Alpha Productions, and Digital Webbing Press.

Now, Charlton Neo is proud to annoucne that E-Man is coming home, back in a brand-new adventure that will be appearing in Charlton Action by the men who first brought him to life, Nick Cuti and Joe Staton. Recently I was able to catch up with Nick and Joe and got the skinny on their new E-Man story. Here is what they had to say:

Dan Johnson: You gents created E-Man over forty years ago for the original Charlton Comics. How does it feel to be bringing him back for the new Charlton Neo line?

Joe Staton: I have friends that sometimes I don't see for ten or even twenty years, but then I'll spend some time with them again, and we have things to catch up with, but it's comfortable like we've been hanging out all this time. E-Man is like that. He never gets old, being an energy creature and all, but when I get back to spending time with him it's still comfortable.
Nick Cuti: Most fans have heard that I’ve never been a big fan of superheroes. That’s not entirely true. I used to read Superman, Batman, Captain Marvel, Spider-Man, and Plastic Man when I was a kid. What I have against them is that they have almost completely taken over the comics. Where there used to be westerns, space opera, police drama, jungle adventures, animal antics, romance and war there is now superheroes. However, I think superheroes are great. And when it came my turn, thanks to George Wildman, to write a superhero, I was thrilled. I wanted to write something different, to break away from the glut of superheroes which filled the comic pages of the seventies. So, I turned to Plastic Man as my guide. He was the most unusual superhero of his time and I used to love reading about his escapades. I modeled E-Man after him, adding my own unique touches to the character, but he was cancelled after only ten issues, so I figured I was wrong. Still he survives. I am delighted beyond words that he has followed in the footsteps of many unusual concepts, and become a cult favorite. It validates my original feelings for the character and I cannot express how happy I am to be still writing E-Man scripts forty years after his cancelation.

Johnson: Tell us how this new E-Man story came about. What started the ball rolling?

Cuti: It was Mort Todd and Fester Faceplant who suggested Joe and I do another E-Man story. I called Joe because I knew he was so busy with the Dick Tracy comic strip, and a syndicated strip takes a huge toll on one’s time. Joe and I spoke over the phone and we decided it should be a three-part story, but I was not to send Joe the script until July when Joe had some time to work on it. So, I began working on the concept, based on an idea I had years ago, but the comic company where it was supposed to be printed, Digital Webbing, stopped publishing. 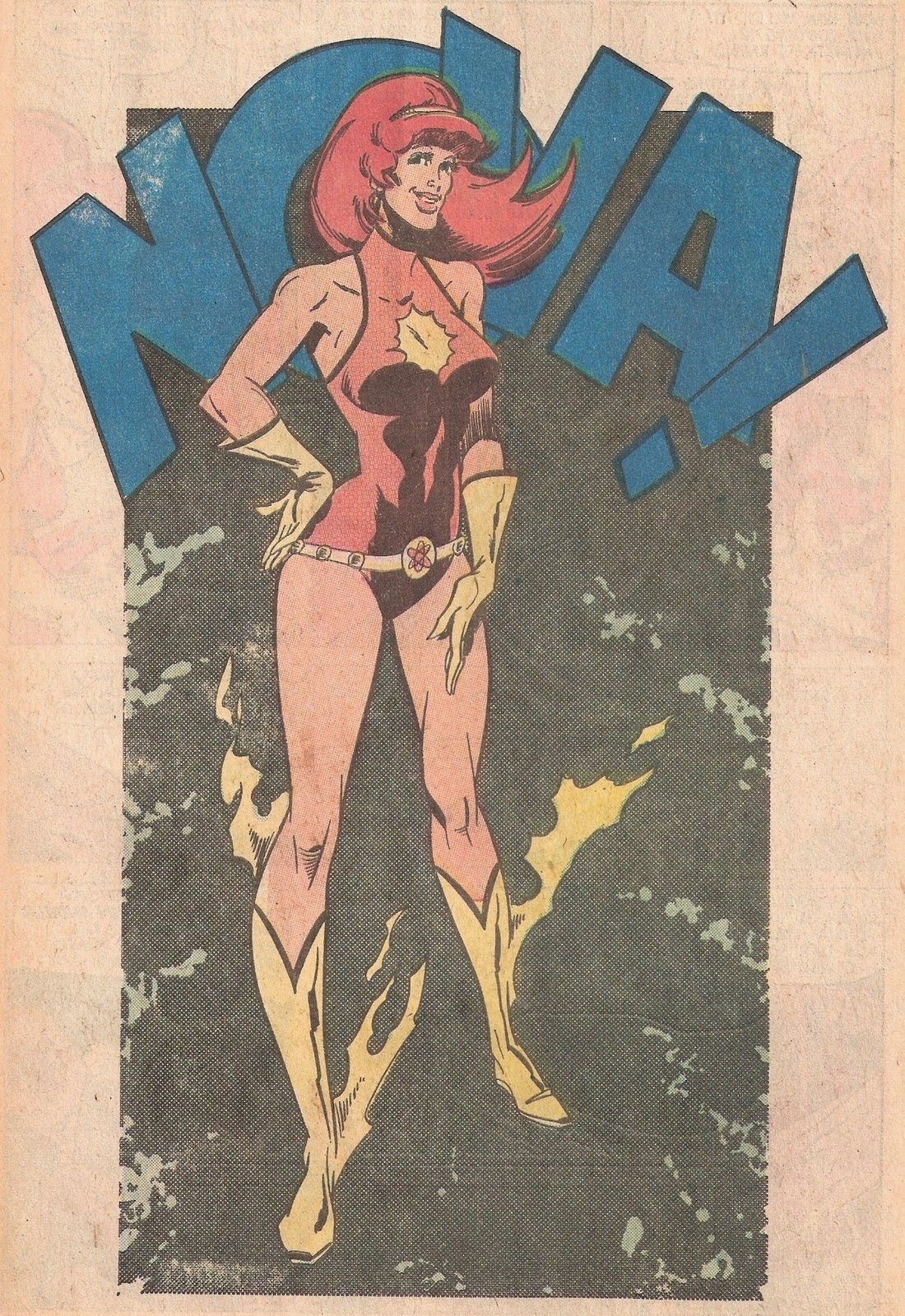 Staton: Nick and I had done three E-Man issues for Ed Dukeshire's small publishing company, Digital Webbing, seven or eight years ago and we never got to finish up the run as Ed shut down printing. I knew Nick still had a storyline in his head involving Nova Kane's little sister, so this seemed like the time to attend to that.

Johnson: That sounds exciting! What else can you tell us about this new E-Man adventure? What can fans of the character expect to see?

Cuti: Basically, I wanted to explore Nova Kane’s past. Everyone knew E-Man’s story, but not many people knew about Nova’s history, mostly because I never wrote much about it.

Staton: Nick gets to tell the tale of the Colchnzski family. It's Nova's birth name. I guess she's Polish, like Blackhawk. We did a bit long ago with Comico about E-Man's family, when he returned back home to find the super-nova where he was born, and we got into Michael Mauser's earlier years at First, but it's time to see where Nova came from.

Cuti: Nova was born in Pennsylvania; I had spent a few years as a camp counselor in the mountains of that state so I set the story there. It mostly involves Nova, her family and her younger sister, Anya, who both admires and resents her famous big sister. She is given super powers and becomes Ms. Fortune, a sort of reverse Lady Luck. This causes conflict with Nova and a big confrontation ensues between the forces of good and evil involving many of the past E-Man superheroes and villains. We also get to meet Nova’s mother and father, a tribute to the wonderful cartoon series, Toonerville Trolly.

Johnson: So, what about future installments? Is this just the beginning of an E-Man revival? Can we expect to see more new adventures after this one?
Staton: I'm approaching this three-parter as the final E-Man story. I don't anticipate doing another, but, hey, you never know.

Cuti: That is impossible to say at this point. E-Man lives the same way I do, from opportunity to opportunity.

Johnson: Will we be seeing some other Cuti and Staton collaborations for Charlton Neo besides E-Man?

Cuti: Also, impossible to say at this point, but let’s see how this collaboration goes. I’ve included so many characters in this trilogy; Joe may never want to collaborate with me again.

Staton: For the new Charlton line, I did a cover last year for Career Girl Romances, and I have a script in for a little Paul Kupperberg story for Post-Modern Love. Also, I have a script from Nick  for a story called “Mastermind” that Michael Ambrose will be putting out in connection with Charlton Spotlight. Nick originally wrote it as a proposal to be done with the late, great Don Newton. It's a real Charlton script, just never drawn up or printed before.

Johnson: Finally, E-Man has become a much beloved character over the last four decades. Through his many incarnations, he has built up a tremendous and loyal fanbase. Is there anything you’d like to say to those fans now?

Staton: Considering the confused publishing history E-Man has had, and how many times I've considered him dead, I continue to be amazed that he and his little gang of heroes can still summon fans to share his optimistic take on life and the universe and everything. I'm happy that the fans still find a place for that.

Cuti: Besides, thank you, I can only hope for an E-Man movie. When E-Man was first created, the technology wasn’t there for a believable movie. His shape changing would have seemed ludicrous, but now it could work. Fans have been responsible for saving and elevating so many characters and series of the past, here is another goal for those ambitious young people. But, really, thank you. Joe and I owe this all to you.
Special plug additional: In 2011, a new version of First Comics put together a Trade Paperback collecting all of the original E-Man stories from the old Charlton run in the early 1970's along with some stories that ran in the Charlton Bullseye fanzine and have never been printed in color before.  The collection has never actually been distributed, but can now be ordered from First Comics at http://1firstcomics.com/

Also, Joe Staton has files of the Digital Webbing E-Man series that he got from Ed Dukeshire. Joe says, “They're nice stories with modern coloring and the comics were never widely distributed.  It might be cool if we could think of a way to package them with this new story of Nova and her sister.  You never know.”
Posted by Paul Kupperberg at 6:34 AM