By Roger McKenzie and Sandy Carruthers 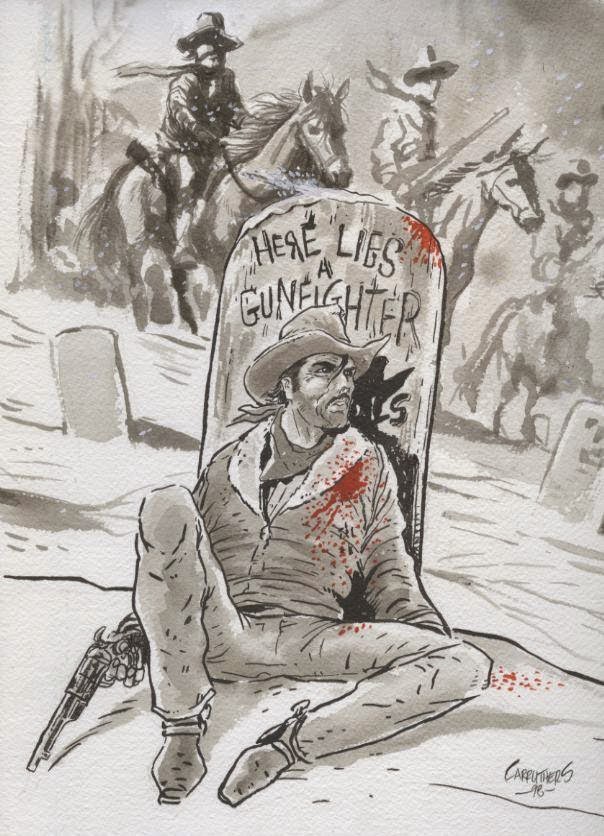 Born the seventh son of a seventh son, Gabriel Travest was haunted by the lost souls trapped between Heaven and Hell as he roamed the western frontier always in the shadows of this world and the next.

But finding solace and peace in neither.


As if Sandy's illustration wasn't enough to whet your appetite for what's to come, here's a peek at the first page from Roger's script for the debut adventure of Gabriel Travest—Spirit Talker:


PANEL 1: Ext. shot. The frozen northlands. A heavy wind is blowing a blinding snowstorm. It is the dead of winter. The forest trees have long since lost their autumn leaves. Twisted branches, like wooden talons, claw at the sky. A cold, desolate, landscape of snow-laden trees and distant mountain peaks all but lost in the heavy, swirling snow. In the distance a lone rider appears. Far away. Much too far to see that it’s Gabe. Or the torment in his eyes this cold and brutal day.

CAPTION: Even here, in this cold and frozen wilderness, I can not escape them.

PANEL 2: Same angle as panel 1. The rider is closer now. Head bent. Shoulders slumped. Rider and horse, pounded by the storm. And the snow. Snow that has begun to swirl more thickly around them. Almost as if…taking shape. Vague, human shapes. But surely, just an illusion…

CAPTION: Even here they cry out to me above the howling fury of the storm…

PANEL 3: Same angle as before. Gabe is closer now. The storm pounds rider and horse. His head is still down. His hat and shadows also help keep his face obscured from our view. The snow does, indeed, now seem to be forming into human faces. All around him. Men. Women. Children. Still indistinct…still somewhat indefinite. But as Gabe rides closer to us the more distinct the figures become. The faces in the storm.

CAPTION: Even here they are lost.

PANEL 4: 2/3rd page or so title splash. Upshot past his trudging horse to Gabe. Angled so we see his weary face now. His haunted eyes. He holds the reins of his horse loosely in one hand. He looks neither right nor left. Just down, hopelessly. As if perhaps by doing so the faces that have now without a doubt formed in the snow around him. Staring at him. Dead eyes pleading with him. Screaming silently at him with impossibly wide mouths. Clutching at him with clawing, talon-like hands.


CAPTION: Even here, souls unable to find either Heaven or Hell.

CAPTION: Yet even here they find me. As they always, always do.

CAPTION: But I can not help them.


Co-Created and written by: ROGER McKENZIE