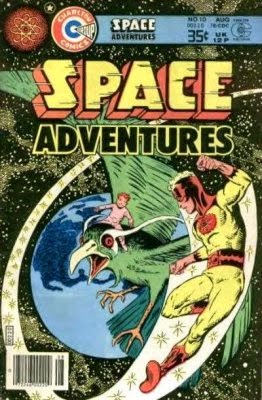 I was seven when I started collecting comic books. Even at such a young age, I knew I was a DC boy. Oh, every now and then I’d pick up a Marvel or Gold Key book, and I was a Dennis the Menace fan right out of the gate. But DC Comics got most of my business.

At that age, I was aware of Charlton, but had never bought any of their books. I wasn’t into horror just yet and that was all the company seemed to print. All that changed one evening while I was out grocery shopping with my parents at Kroger’s. That night, I made an amazing discovery on the store’s spinner rack. While looking for something to read, I found Space Adventures #10, and it became the first Charlton comic I ever bought. The reason for me picking it up was simple enough. This comic was not about horror, but rather outer space, and this book had a superhero on the cover: Captain Atom.

Now, I didn’t know who the good Captain was, so discovering an all-new character (at least to me) was exciting! At the time, I didn’t know that the stories in this issue were reprints, all published years before I was even born. But even if I had known, it wouldn’t have mattered. Captain Atom was a fun character and I found myself becoming a fan.

When I discovered Captain Atom, I also discovered Steve Ditko, the artist who illustrated these wonderful stories that caught my attention. As I got older and began to learn about the history of comics, Ditko quickly became one of my favorite artists. So, as you can imagine, this book holds a special place in my heart for another reason other than it being my first Charlton comic, it was also my first Ditko comic.

As time went on, I found other comics featuring Captain Atom and his cohorts, mainly through Modern Comics reprints and the occasional new story. While DC was still my flavor of choice, there was something wonderfully different about Captain Atom, Blue Beetle, The Question, and Nightshade.

Less than a decade after I bought Space Adventures #10, DC bought the rights to Captain Atom and the other Action Heroes. Very soon, the comic book character I first discovered in 1978 would even be hanging out with the Justice League. What can I say? Two favorite worlds had united. It’s like Reese’s peanut butter cups. They just seemed to go great together.

Still, every now and then, it is fun to go back and reread this issue that started it all for me and remember when Captain Atom was uniquely Charlton. It serves as a constant reminder that while we can have our favorites, every now and then you have to try something different.

© Dan Johnson
Posted by Paul Kupperberg at 5:31 AM