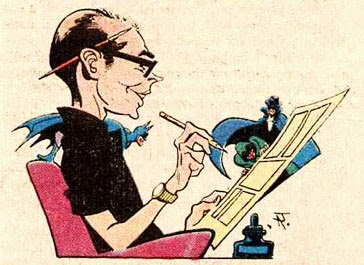 Jim Aparo was probably one of the best artists of the Silver and Modern ages of comics and, though remembered primarily for his long tenure on Batman for DC, he began his comic book career at Charlton Comics in 1966 drawing everything from Bikini Luv to the Phantom. Jim soon made the move to DC Comics, one of the creators Dick Giordano brought along with him to his new editorial home. Jim’s early work on Aquaman, The Phantom Stranger, and in the pages of House of Mystery and House of Secret quickly made him a fan favorite, but it wasn’t until his long (almost 100 issues!) run on Batman in the pages of The Brave and The Bold that Jim’s star went nova. The Spectre (in Adventure Comics), Batman in Detective Comics, Batman and the Outsiders, and many other projects followed, and Jim continued his awesome contributions to comic until 2004, a year before his death.

Neophyte Steven Thompson remembers a brief encounter with the artist that showcased a side of the man that fans of his nearly 40 years of work seldom got to see:

“My wife and I met Jim Aparo at a Chicago Comic Convention in either 1989 or 1990. He was sitting all by himself so we spent quite awhile talking with him. He said it was his first convention and he couldn't figure out what all the fuss was about, but he was enjoying meeting fans. He said he never really knew he had fans that were older than 12.”

Neo writer and editor Paul Kupperberg, who had the honor of working with Jim in both those capacities during his own career with DC Comics, has a similar story to tell: 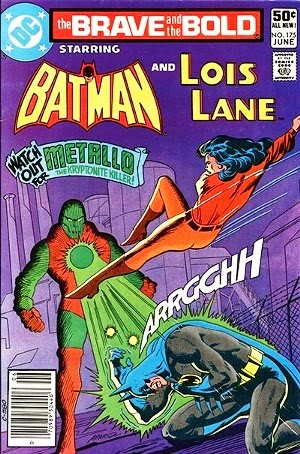 “I was at that same convention in Chicago and, like Steven, found the man sitting by himself at a table so I leapt at the opportunity to talk to him. I went over and introduced myself and as soon as he heard my name, he said, ‘Oh, right. You wrote that Lois Lane Brave and Bold.’

“I was flabbergasted. Yes, I had written a single, and to my mind, undistinguished issue of The Brave and The Bold that Jim had drawn nearly a decade earlier, (#175, June 1981) and I couldn’t believed that he not only remembered it but insisted that he’d had fun drawing it. We spent about 20 minutes talking during which time several other fans came by for autographs and handshakes from the gentle, genial man.

“After each encounter, Jim had a broad smile that lit up his face, expressing, as he had with Steven, that he never even know he had fans, much less ones who were so excited to meet a guy who was, after all, just doing his job. I said I was glad he got to come to the show to meet those fans so he knew what he and his work meant to them...and, incidentally, I was one of ‘em! Having the great Jim Aparo draw one of my stories was, I assured him, a high point of my comics writing career. The Bob Haney/Jim Aparo Batman in B&B was and remains, I said, my absolute favorite version of the character ever and, honestly, just standing there talking to him was giving me a major league fannish rush. I knew I was embarrassing him, but I’m glad I did...it was about time the man knew the important place he held in comics history and the hearts of his fans. 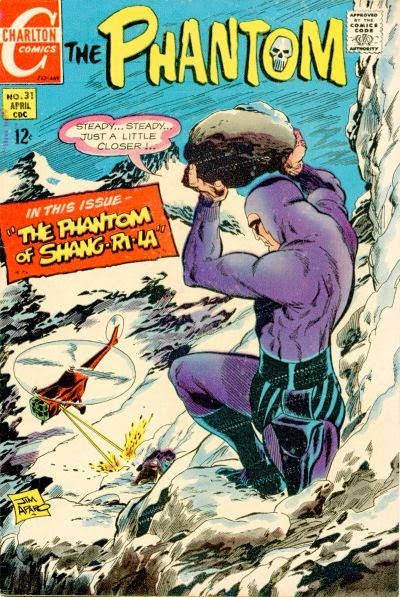 “I had to go, as I was running late for some panel or other, but Jim and I did chat briefly on and off the rest of the weekend and, 20 years later, I got to assign him several jobs while I was in DC’s Licensed Publishing department and renew our acquaintance, albeit only over the telephone. On my first call to him, I didn’t have to remind him of our earlier encounter. ‘We met in Chicago a long time ago, didn’t we?’ he said. I said we had indeed. He chuckled and said, ‘I remember that convention. It was really something, meeting all those people. Really something.’ 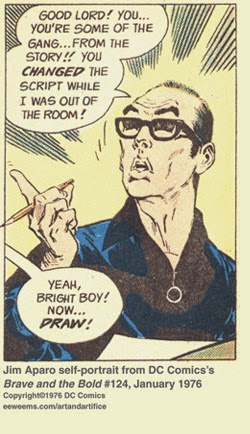 (Jim Aparo is represented in The Charlton Arrow #3 in Steve Skeates' reminiscence of their collaborative effort on Charlton’s comic series featuring The Monkees in the company's Teen Tunes and Pin-Ups magazines. The strip lasted only a few issues (Charlton lost the rights to the Pre-Fab Four to rival publisher Dell Comics), but you'll find this forgotten gem reprinted here. Use the link at the upper right of this page to pre-order the issue. Now!) 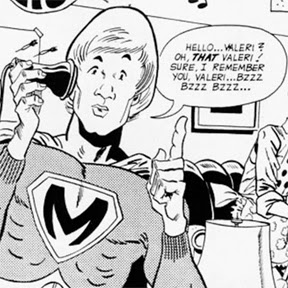 Posted by Paul Kupperberg at 6:46 AM