Behind The Scenes: Filling in the Blank

At some point during last March’s Planet Comicon in Kansas City, I wandered over to say hello to Rick Burchett. Rick and I go back a ways, at least to 1991 when he was the artist on the most excellent Mark Wheatley scripted The Black Hood, one of DC’s Impact Comics line revival of the Archie Comics superheroes that I edited. Post-Impact, I hired Rick for the occasional job here and there, including illustrating several Batman kids books for Scholastic. But I had been a fan of his work since his stint on DC’s Blackhawk and remained one through his work on various and sundry Batman titles and beyond.

Anyway, that March day in KC we exchanged pleasantries, did the obligatory catching up on life and then Rick said, “So, who do I have to kill to get in on this Charlton Arrow thing?” Now, keep in mind that at that time, the first issue of The Charlton Arrow hadn’t even been released; in fact, we missed having copies for sale at the show by a week or so. But we had been talking it up plenty big on Facebook and Rick, a fan at heart like the rest of us involved in the project, had heard the news.

I was so delighted to learn that Rick wanted in on our little fanzine-on-steroids that I didn’t even think to take him up on his offer (oh, there are some old scores I could’ve settled!). Instead, I just said, “You want in, you’re in. What do you want to do?” Rick, a Western buff, had his answer ready. He wanted to do a Cheyenne Kid story. I told him it was a done deal; I’d write a Cheyenne Kid story for him to draw.
I wrote, Rick drew, and the result of that collaboration can be found in the premiere issue of our second title, Wild Frontier, available in November. Needless to say, it’s a first class job by a first class artist working in a genre he loves. And, also needless to say (but I’ll say it anyway), I’m thrilled to see a script I wrote brought to life by Rick, an artist whose work I’ve long admired.

I didn’t think it could get any better, but I was wrong. While still at work on Cheyenne Kid, Rick emailed me to say how much fun he was having and asked what was next. I wasted no time in writing back that we had another title in the works, Charlton Action for which I was developing a new character: “I've got something in mind that's sort of Spirit-ish in tone, with a character in the Question/Batman mode.” Rick responded “Yowza!!!” Citing his love of drawing those “guys in suits” he signed on sight unseen.

It’s hard for a writer not to be inspired when he knows an artist like Rick is waiting to get his hands on your idea and turn the words into pictures, so I got to work, jotting down a few ideas, just a bare bones word sketch of what I had in mind for a character I was calling Blank.

Here’s what I sent Rick:

“Blank is a self-appointed troubleshooter, righting wrongs, steering good people onto the right road and manipulating the bad guys to throw themselves under the bus. Black suit, hat that shadows his face, gloves...but when he does leave fingerprints, instead of the usual ridges & loops, there are cryptic symbols. His calling card is blank...but at times of crisis messages appear on them to the holder. Everything about him is engineered to make him appear supernatural, but in the end there’s always a rational explanation for what he’s done...or is there?”

Here’s what I got back in return: 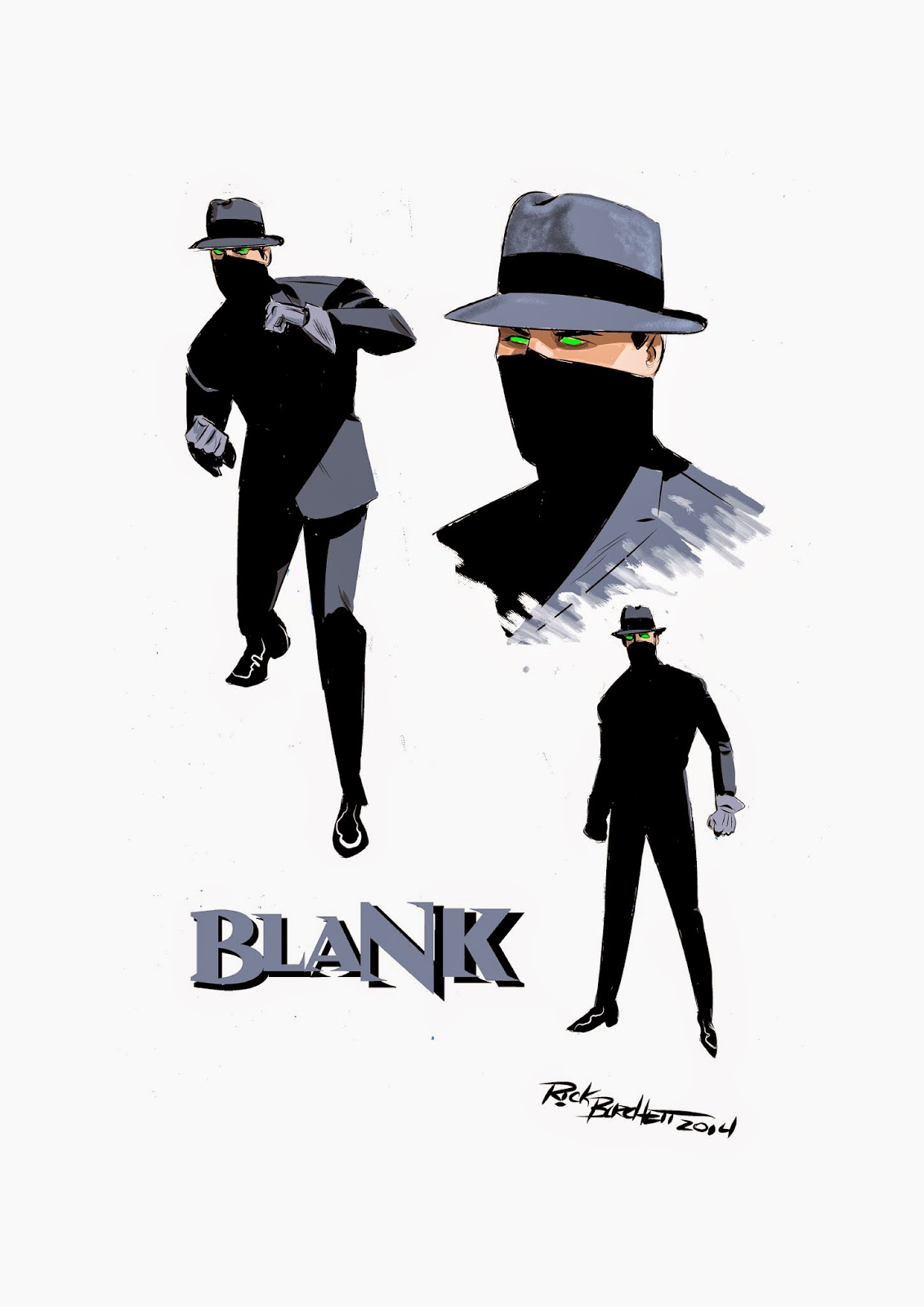 After seeing Rick’s sketches, the script just kind’a started writing itself. And the result is coming your way in 2015 in Charlton Action #1. I hope you’re even half excited as I am!